We arrived shortly after 5pm. We were greeted by three cowboys at the covered bridge. The children were so shy that they hid behind me after we were greeted with a hearty “Howdy!” It’s a pretty relaxed sort of place. You freely wander about the grounds. You can shop in the many stores and even get an old time picture taken. Although I wouldn't recommend the photo thing, unless you have plenty of $$$ to spend. If we were to have a picture taken it would have cost us a family of four $45.00 for one picture! We found other things to do. It was fun to watch the girls react to everything. There were random gunfights and some people in jail. Plenty of questions from Leah kept my mind spinning. 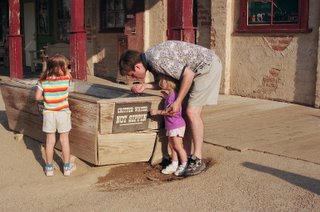 Never one to pass up an opportunity for a funny picture Keith posed for this silly one. Of course the staff thought Keith was really drinking from the trough. After we sorted it out with the staff we moved on to other activities. Both girls rode the camel Willie. He was a nice fella and even Mom and Dad had fun. After the camel Olivia wanted to see the animals. I went into the petting zoo with the girls. There we petted all sorts of farm animals. Olivia was most pleased with the mini ponies. She loves ponies and wanted to take them with us. We took a very slow stagecoach ride around the dusty back roads. It was bumpy, noisy and dirty. Olivia pointed out at least 50 jackrabbits. That part was the most fun for her. We ate supper at the famous restaurant there. Numerous celebrities have made an appearance here. Most are singers and have performed on stage in the main dining room. We ordered steak and ate while listening to country music played live. I don’t remember the name of the band they were very good. During the meal a nice woman stopped by to make a balloon animal for the girls. Leah chose a butterfly and Olivia insisted on having Spider-man  You never can tell with Olivia. After dinner we were looking for something to do. We passed by the crazy miner, he frightened the girls nicely, and made our way towards the train. By this time it was dark and scary and perfect for a train ride. We had a few more things to see before we left, but only went to see the snakes. That was not nearly as fun as Daddy had hoped. The room was so hot and crowded that we didn't look around long.
Email Post
Labels: Vacation