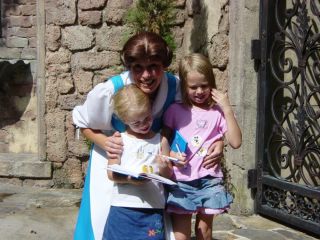 Olivia was so excited for this. Belle is her favorite princess. Not to mention she also loves books. We found a seat up front, in the sun, and we were hot and sweaty by the end. The whole point of this attraction was that Belle would tell her story while helpers from the audience would get to be characters and dress up to act out the story as Belle directed. It was charming and fun. The nutball lady next to us made a mini scene, providing the before story entertainment. The husband apparently misplaced his wallet and wanted to verify that is was not in the backpack she was carrying. She raised her voice and told him "No. I checked, nothin' in thar. Only snacks 'n water." He insisted that she check again. She refused. Then he asked if he could double check. She said "Here's the damn bag!" and threw it at him. Grandma and I were beginning to wonder about this woman's sanity. We said to each other "Geez this is Disney World, behave yourself." Their daughters were growing impatient and it was hot so I guess tired too. They were whining about being hot and thirsty. The youngest tried to climb up into her mom's lap and she shoved the 3-year-old away growling "Get off me! I told you to stay off me!" At this point Grandma and I wanted to slide away from this mean woman, but by this time there was no more room. Thankfully the show was beginning to start and psycho mom began to calm down. Nonetheless she did not sit quietly. She made a point to inform EVERY one that her daughter's favorite princess is Belle. I thought 'No kidding lady? Your daughter likes Belle? I bet none of the other 35 little girls sitting here like Belle at all". I have high regard for the Disney performers. They deal with idiots like this lady every day, dozens of times. They handled this woman well. They picked her daughter to help with the story - good move, total distraction to prevent any more interjecting. Despite the sour grapes next to us we had a pleasant time. Olivia had a smile on her face that was so BIG I about cried. I knew how important this was for her to be sitting this close to Belle listening to the story. She was mesmorized. After the story we waited to meet Belle. Olivia was very shy yet pleased to meet Belle. I forgot to mention that my girls and those around us, excluding psycho family, were all well behaved and waited patiently for the story to start. Overall this was a wonderful attraction.
Email Post
Labels: Books I Read Vacation