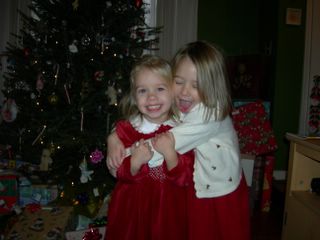 Two sleepy little girls had to be woken up this morning.

Stockings filled with little somethings were left on their beds. They were so pleased with those little somethings that is all Santa needed to bring. The girls were just plain happy with that little surprise. Olivia was so happy that she said "I have to tell Santa thank you for my pretty gifts". Awww.

When they saw the booty left behind by Santa they were not very interested in leaving the house. With all the excitement we were distracted by the fun. We rushed around to get dressed to make the 8am mass. Mass was wonderful, singing and it was all together beautiful. So peaceful.

We returned to eat a quick breakfast of eggs and muffins, no time for eating. It was on to the important task of opening the gifts. Daddy made sure that each of us had a specific spot for our gift piles to form. That way we would know where our stuff was and then when opening was over we would know what to put away. This of course was mostly a good guess, as the hours passed everything kinda migrated all over into one big giant mess. After the first few gifts the girls wanted to open the toys and play. To heck with the rest, they preferred to take it slow. Oh, no, couldn't let that happen, we forced them to keep on moving. There will be none of that playing stuff. It's seek and conquer, mass unwrapping and moving on, no time to pause. Time to play will come later.

With all the encouragement it took 3 hours for the girls to get through the gifts. An hour later we discovered an unopened gift hiding under a pile of wrapping paper and gift box debris. Olivia had no interest in opening it, Leah had to. It was only clothes, so bummer. Daddy and Mommy spent a long time wrangling open all those beautiful toys in those perfectly packaged boxes.

Marketing-packager-creator-inventor people you should be cursed! Why does a single Barbie need to be adhered to a box with enough tape and twisty ties to bind a toddler? I say forget the whole make the product look pretty in the box on the shelf thing, just toss the product in a ziptop bag and toss it on the shelf. That would be so nice. Imagine the time parents all over the country would save, not to mention all the cursing.

The physical work involved with removing all those toys caused Mommy and Daddy to be wiped out, I needed a cup of coffee and a brisk walk to perk up.

The house remained an absolute mess all day. The girls went wild playing with all the new and interesting things Santa and family gave. Daddy decided to make some sort of order by designating one large box for each girl. There they could put all their stuff and play with it as desired. Yeah right, that worked for a second. At least it was a good idea.

Supper was a little early, and rather simple, ham, rice and green beans. Simple and everyone ate. There were plenty of cookies for dessert. Mmm. Cookies.

Highlights of gifts the girls were excited to see:
Leah: Magic of Pegasus Cloud Queen Barbie and a pink and purple unicorn
Olivia: Pink pony and Strawberry Shortcake princess doll with carriage