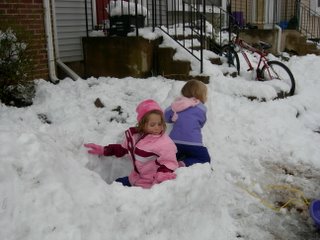 Heck no. Inches can't stop us. We live for this stuff.

Dad lunged out of bed as giddy as a child. He bolted outside to be the first one to shovel on the street. He takes great pride in being "the guy who woke up early to shovel" the walk. Yet Mr. Wakesupearlytoshovel neglected to remember to leave the front door unlocked. I was confused why the doorbell was ringing so early on a Sunday.

We went to church with no problems. I admit, I was a little concerned about the driving in 6+ inches. Dad said not to worry and he was right, it was okay. Few people made it to mass, perhaps it was a get-out-of-church-free card for them. Leah chose to sit in the front pew, wow that was a mistake. Because Badger child Olivia made it very obvious to all parishioners that her parents suck. Olivia was having a hard time sitting still. Dad thinks that since the mass was different, very low key and quiet, she didn't understand it started. I think she was on something. Dad and I had a hard time keeping our giggles under control when her pink pants drooped to reveal her bright blue undies to all.

After brunch I went outside to play with the girls. I wanted to give my snowshoes a test run, Dad said I was silly. Sure there isn't much snow, but geez we never get snow, this is my only chance unless we go to a mountain resort. I pulled the girls around in the sled and managed to dump them out several times. They made a point to tell me how bad of a sled puller I am. Good pullers "don't let peoples fall out" of the sled. Yet I know they'd be rolling around in the snow if I wasn't pulling them along.

We went through low hanging branches and I of course made sure to knock off the snow to create a snow storm on the girls. We ventured by Rick and Amy's house and Rick welcomed us with his snowball artillery. At least we were invited in for Amy's famous Yummy biscotti.

Later on Dad went out to make a snow-igloo-slide in the front yard. That kept the girls very busy. In fact they would still be outside if he hadn't forced them in.
Email Post