This was a busy weekend. On Saturday K-man woke up to a bunch of balloons being dropped on him compliments of the girls. Next was a waffle breakfast. Except that the Belgian waffle maker died, piece of junk. Good thing I had the other one, the one K-man doesn't like (still working!), to save the batter from refrigerator death. I seriously need to toss out some stuff in there, really. We ate ourselves silly. Lots of fresh fruit and baked breakfast goodies. Keith posed for a moment modeling his new red shirt. 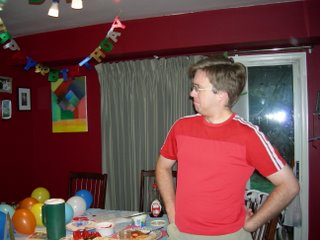 After breakfast Keith wanted to go on a morning bike ride so we geared up and packed the girls in the trailer. What a great morning for a ride. Cool and sunny, so nice and fun. We explored some trails nearby our house. We had no idea how many were there along the stream. The same stream he forged with the girls in the trailer. I believe that was the most exciting part of the ride. What a jackpot of fun! Reminder: do not forge stream in the spring, water is too high. The girls were not that wet, it could have been worse. On our journey we came across a juvenile deer grazing in the field. There were many bird sightings: red-tailed hawk, bluejay, Canada geese, robins, eastern bluebird, swallows, and lbjs. Tons of squirrels chattering in the trees. And we nearly ran over a little blue striped lizard. By the time we finished riding it was nearly noon! Good thing the pizza joint delivers.

The next activity was the driving range. There we whacked away at a bucket of golf balls. I'm still not hitting them well.....grrrrr.....Keith though is getting more control and distance. Soon he's going to be a pro. Must take lessons to get better.....so husband can play golf.......and not drive me batty about being a sorry excuse for a golfer. It's the driving I can't master.

Supper was an evening of backyard grilling. Brats, hotdogs, baked beans and pasta salad. Our friend, R, came over and helped us have a good time. I would have preferred to make the cake myself as I find most grocery store cakes terrible. Alas I did not have time to spare. Oh well. Before the cake was set on fire we tried out Keith's camping ice cream maker ball thing. Keith and R took turns shaking the ball. That will be source of fun all summer, or at least until we break it. R took a few pictures too. I like the one of me freaking out over all the candles on Keith's dinky cake. The ice cream was very good and the girls can't wait to try it out again next weekend. 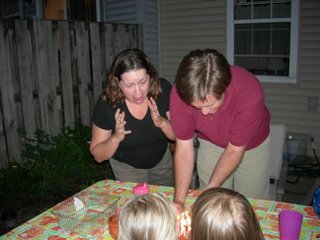 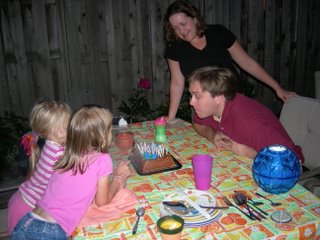 On Sunday we went to the dreaded mall. There were some gift cards to cash in and such. First we stopped at REI. The bike shorts I picked out for Keith were too small. That's a bummer. They were really cool, pockets and padding. There wasn't any larger sizes so he picked out another kind, which he liked better, more roomie he says. Whew! I was worried there would not be anything in his size. He picked out some camping mess kits and other stuff. The plan is for a camping trip next weekend. I don't want to think about that yet.......At the dreaded mall Keith went to get a haircut. That hair of his grows crazy fast. Just look at the pictures of him that morning posing all goofy with the fruit pizza he made for breakfast. And then of him at dinner at Joe's Crab Shack. Big difference. I bet there was enough hair on his head for 2 guys. So while he cut his hair I went to get some lip liner and coconut lip butter at The Body Shop and rose wonder cold cream and lotions at Bath and Body Works. I am so in love with the Magnolia Blossom scent. I stopped by Eddie Bauer and picked out a few things. The capris are so nice. I love the way the fabric feels. Dress up or down so nice to have the option there. Also a very much needed long denim skirt, shorts and a top. 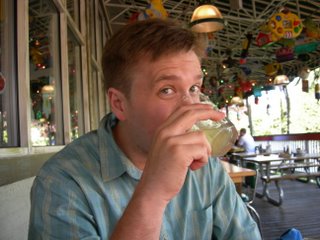 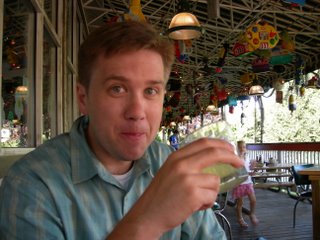 After all that shopping we went out to eat at Joe's Crab Shack. Wow that place was fun. There's an indoor play area for kids. That's awesome! We could eat and the girls were busy playing. They did stop by the table for a few bites of food and ended up wolfing it all down moments before we left. Still it was great to be able to talk with each other and not worry about the girls getting stir crazy. Food was great and sitting on the back patio was so relaxing. I also did the decor. Check out all the kids toys hanging in the rafters. It reminds me of the house where I grew up called "Crazy Mary's house" where this reported nutso lady hung up toys and other junk from her porch and trees. Ahhh memories. K-man ordered a margarita with its own shaker. Which will now become the camping shaker yeah! So the last shots are K-man drinking up. I like the last one. He says to me "Maybe one more drink" as he chugs away. If you can't tell I had to drive home.
Email Post
Labels: Husband