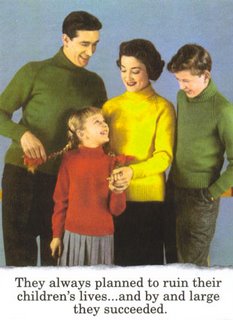 There's point in your life when you realize that your parents achieved the goal of ruining your life. Usually that occurs at the ripe age of 15 or so, when you know everything, because you are so smart. The day you want to go to the coolest party of the year is the time you have to be responsible or something, right? However once you can look back you'll notice that your parents weren't entirely the crazy-child-hating-monsters you thought them to be.

As I am aging there is much I am learning about life. Particularly how teenagers are silly to me. At one time I thought they were a group I could relate to. I have since decided that I must have been hallucinating to think such thoughts. I can see the differences in the ways teens act compared with adults. And even the difference in how teens and college age kids act. (Though most college age kids not all) I have concluded that teenagers as a whole are a selfish bunch. They are generally motivated for selfish reasons. (Chores in exchange for $$$, good grades for $$, want respect but do nothing in return...) Given they have wonderful moments of selflessness but generally too infrequent to label them as selfless. I hear that has something to do with their biological development. It's such a shame all that frontal lobe development takes so long.

As a teen the whole world is looking at you, you the superstar, right? No. Not at all. Most people hardly notice you at that age. Very few adults, and even peers, look at teens with much scrutiny. Yet at that age it felt so. Like everyone else HAD to be looking at you because you are THE most important thing in the world at that moment. Because everyone else has nothing better to do than obsess about YOU. Adults see you. You are first and foremost seen as a kid. Nothing will change that but aging. And that is why parents ruin the lives of their teens. It's just that until you reach adulthood you can't see that it wasn't ruin as much as guidance.
Email Post
Labels: Fatherhood Motherhood parenting Teens