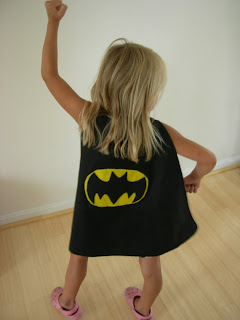 We've had one busy summer and it's winding down. This is the last week of summer vacation and it's raining. A perfect time to catch up on some catching up. While we were in the midst of our busy wedding-vacation-enjoying summer-ness I managed to get a few sewing projects done. And I stress few. The most important one was the superhero cape for the little neighbor boy. He has coveted Keith's boyhood cape, the one with Superman on one side and Batman on the other, to the point of which this little fella and I had a standoff. Recently he insisted that he needed the cape and I insisted that it remain in our house. He succumbed to my powerful laser Mother Stare and the cape remained. Bwahahaha. For as evil as am being The Mom that left me feeling sad. I didn't like having to strip him of his superhero-ness, that is the best part about being a child, to BE someone. Way back in July I took a trip to the fabric store to create something for that little fella. There we selected the things we needed to make another cape complete with awesome felt shields. I had the good intention to get this cape complete, wrapped and to him for his birthday. Alas that was foolhardy. Too much going on and there were some things that I needed to work out; such as what to put on the back of the cape. I wanted to create him a cape that had his favorite hero, Batman, but was different from our cape so as to not complicate the superhero play balance. (We are huge dress up players on this street.) After getting everything cut and ready to sew, even the Batman shield completed, I was at a minor mental block. It's hard to think of another hero (not Superman) that wears a cape that a 4 year old would know and understand. Because of the block and business I left the project unfinished. Once we returned from The Wedding I revisited the project. Then it hit me. Create a unique hero. A Him hero. 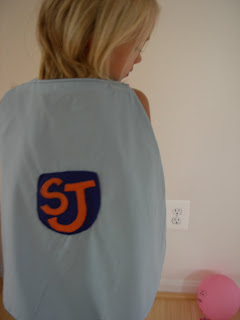 I used his initials to create a shield a little like Superman. I chose his favorite colors and soon the cape came together quickly. Finally another project was complete. We wrapped it up and was he happy to try it on. At first he didn't want to wear it, telling his mother to put it in the basement. She looked at me puzzled. Because surly he would want to wear it now. Then I explained how all of our costumes are in the basement that he was just following the rules. By the time I made the walk home he had raced to our yard with it on. He couldn't resist the urge to be Super. With two heroes on our street I'm sure we'll be safe.
Email Post
Labels: Children Sewing

Carolyn said…
Looks like Olivia enjoyed modeling for you.
10:06 AM