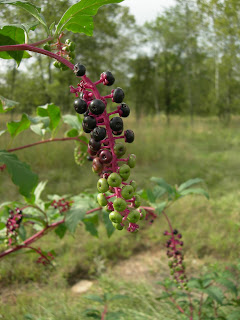 This massive plant is filled with dark purple berries which happen to be a favorite of several songbirds. As fall begins the birds are eager to fill up on these juicy treats. We have several plants in our area scattered throughout the grassy meadows. I came upon this one here on my morning walk and it is much taller than me, as are most I see. I dug up one earlier this year as it was far too happy in a spot in my garden and was it a bear. The root system of these plants are quite impressive. I struggled with great difficulty removing as much of the plant as I could. They are very hardy and I expect it to return next year because I left behind some of the root. If you go over to the Wikipedia site you will learn all sorts of things about this plant. The berries have been used for inks and dyes. There are some folk remedies mostly treatments used by Native Americans. People even eat the leaves of this highly poisonous plant! I can say that just by the looks of it, not something I'd like to eat, but that could be the botanist in me. I much rather watch the birds enjoy themselves as they eat themselves silly.
Email Post
Labels: fall Nature urban wildlife