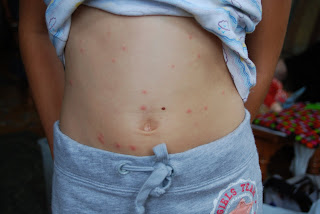 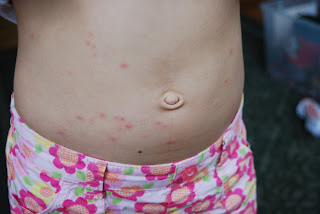 What could be more fun than a wedding in Colorado? How about some chicken pox? Anyone? No? Aww come on it'll be loads of fun.

Yeah, so, uh, the girls came down with the chicken pox 2 days after we got to Colorado. Excellent. The first sign of the blisters came with Olivia on her tummy, about 3, which we assumed to be mosquito bites. The girls played outside all day Saturday and it would not be out of the ordinary for one to assume mosquito bites. Then they spent the night with their aunties and came home with more "bites". I didn't know what it was, fleas, other bugs. By Monday they were covered all over their torsos and a little on their legs and upper arms. The Grandmas took a look and said "Chicken pox", I was hoping it to be something else, anything else. They are to be flower girls in a wedding Saturday and can't be poxed up. The confirmation came with a phone call from Keith. The little girl across the street who they were playing with the days before we left came down with chicken pox. I called the Doc and inquired about the disease. I was hoping to learn more about how it manifests in children who have had the 2 doses of vaccinations. I wanted to know if they would be well enough to be in the wedding, particularly will they be contagious to others. The Doctor's office was very unhelpful, not even telling me basic info such as what to do, which confirmed that I wasted my time. Unless I took the girls in for an office visit they were not going to provide me with any help. I don't know what they think I was going to be able to do so far away. Actually I think it had more to do with them disbelieving that my children with the 2 doses of the vaccination could have even gotten the chicken pox. They kept asking me "Are you sure it's the chicken pox and not something else?" because having 4 confirmed cases of kids on our street wasn't enough. The six children that were swimming together and playing for 2 days straight all came down with the disease. So yeah, I'm pretty sure it's chicken pox. They insisted I go to an urgent care or other doctor have them confirm it, have that doctor call my doctor and confirm it and then after being out about $400.00 they would tell me what I wanted to know. It's not worth the hassle or the loss of cash to confirm what I already know to be true. The good news is that even though the girls have chicken pox they are quite well, you wouldn't even know they have it, playing and acting like normal. Perhaps this means that they will have extra immunity?

My life lesson to all you out there with kids: Just because your child has received the 2 doses of the chicken pox vaccination it does not mean they can't get the illness. It will be very mild and way better than if it was contracted without the vaccine.
Email Post
Labels: Children Colorado My girls parenting Summer Vacation