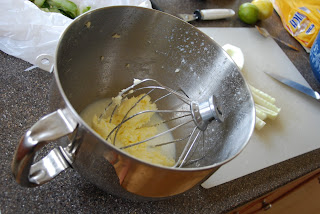 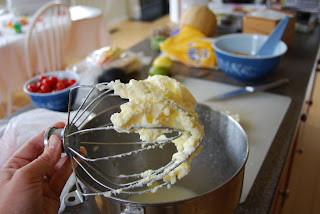 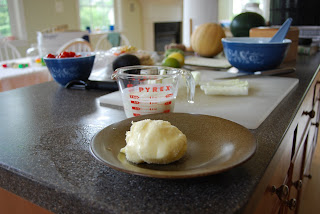 Butter making has become a household chore of the past long lost to the consumer based life. We visited a dairy farm a few falls ago and had our own try at making butter which was fun because we made Keith do all the work. It was remarkably easy when some one else was working the cream. I even considered looking for a little churn. In my mind the nostalgia made it seem so delightful. Then one day I read the post about making butter over at 16 Sparrows the Grandma Club I wanted to try it myself. The idea of making my own butter still excited me. Since I have no churn nor did I want to shake a jar for hours I was glad to see the stand mixer option. Gee why didn't I think of that?

It did make the process go quickly. I made my butter from the heavy whipping cream in the fridge. It was supposed to be for some whipped cream, likely for a pie but, uh, there are no pies and the expiry date was coming quick so it was recruited for butter. All I did was pour the pint into the mixer bowl, attached the whisk, turned it on medium low and let it go. Once the cream became reaching the whipped phase I scrapped down the bowl and resumed mixing but went up a speed level or two. This is where it becomes important that you watch this because the whipped cream goes quickly to butter and then well, if you walk away, as did I, you'll end up with buttermilk all over your kitchen. I was pleased to see the butter all buttery and just like you think it will look.

I scrapped the butter off of the whisk into a mesh colander set over another bowl. I then dumped out the butter and the buttermilk. I mushed up the butter back into one piece and set it aside. I drained the buttermilk out of the bowl into a measuring cup. I was curious to see how much it gave, about a cup. The butter ball went to the bowl with some water where it was rinsed by smashing it against the bowl. I repeated this until the water remained clear after mashing the butter around. This is a part of the process that is very important. Rinsing the buttermilk out will prevent the butter from going rancid. So tough it out and once you try that butter you'll know it was worth the effort.

One pint of cream will give you about 1 cup buttermilk and 1 stick of butter. I was able to fit all the butter in my butter crock which fits 1 stick of butter and trust me it won't last long. I ate a good deal of bread and butter just to make sure it tasted alright. It does. Now don't go thinking I'm going to be making my own butter, it was great to do and I like knowing what to do, but seriously, this is not how I plan to spend my days. I think that if I were making an herb butter this is the way to go. It would be a nice little addition to a party with some bread. And for sure it's a great way to use up cream before it goes bad. Besides making your own butter is definitely a way of ensuring you'll eat a whole stick of butter far too quickly.
Email Post
Labels: Cooking In the Kitchen Recipes

Helen said…
Yvonne, this is great! I'll have to try making butter with my girls. We made curds and whey by putting vinegar into milk, but butter would be much tastier, especially if we make bread too.