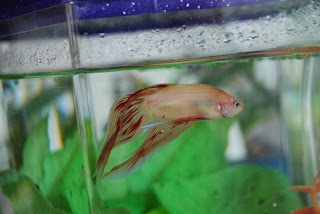 This is Mr. Crumbs. He's our new family fish. Our trip to the pet store for cat food ended up being far more exciting than I intended. The girls noticed the massive betta display and were spellbound. Cat food was on my list not a fish. The love of bettas began with Grandpa F'Laker back in June. He took the girls to the pet store to pick out a betta for his small desk aquarium. They chose a pretty purple fish and named him Grapes. They were very heartbroken about having to leave behind Grapes but you can't take fish on airplanes or at least we were not going to attempt that sort of crazy travel. They have been asking about if we would be able to get a fish and that they have missed Grapes so much. I thought perhaps a fish is not such a bad idea and maybe it might give them some more experience with pet responsibility. We found a small aquarium and picked out the food and water stabilizer. Since I had a whole bag of those flat marbles at home we decided to use that instead of gravel. I think the marbles will be more sanitary because they are easier to clean than gravel. (And less likely to wash down a sink drain) I thought about getting a live plant but I really don't know much about bettas so I'll leave that for another day.

The girls had a hard time deciding which fish was the best one. Eventually they agreed on a white betta with red spots. Naming him was a little tricky. They had great ideas but all were girl names. Which isn't a problem except that we have a male betta and it just seems like a better idea to name it something masculine-ish. Crumbs was mentioned and Leah suggested we add the Mr. to make it more understood. So now we have Mr. Crumbs living with us. He is quite happy to be out of that awful little tub we brought him home in. We put him on the counter next to the sink. That should give him a good spot to watch us and for us to watch him. 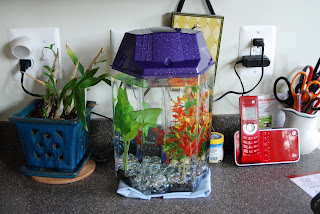 Judith said…
Welcome Mr. Crumbs! Bettas are so lovely. We had one called Blue when we lived in GA for three days.
11:18 AM

maya | springtree road said…
i think you're lucky, actually. the last time we walked into the pet store for a cat scratcher, we walked out with a new kitten.

Yvonne said…
Maya I think you're right. For the past 2 days my husband asks me "get any more animals today?" He's seriously afraid I'll come home with another critter. So first we start with a fish then.....
6:37 PM

Carolyn said…
Oh no, I have to go to the pet store to get a new air pump for my fish tank. It's hard telling what I'll come home with. Maybe a new kitty?
10:45 AM