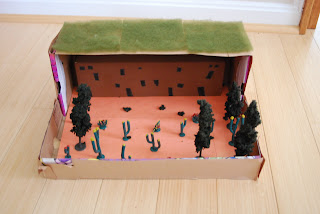 Olivia had another major project to complete this year. She has been learning about Native Americans/Indigenous Peoples in her history lessons. The class was assigned a big hands on required project to present to the class. The choices were: make a movie, create a game, or a shoebox diorama. Olivia chose the diorama. That was the biggest selection in the class. I think all kids like to make dioramas. This time I made an effort to guide her just enough to stay true to the project.We looked at some of our pictures from our trip to Mesa Verde for inspiration. She decided to focus on cliff dwellers. I think considering her supply pool she put together a decent replica. At first she was looking for a clay like adobe village, something more Navajo in appearance. I'm glad she looked at those pictures to find a different inspiration. When we visited Mesa Verde she was 4 years old. Though young she enjoyed the visit and was even strong enough to climb the various ladders up and down through the tour. I just can't pinpoint her level of memory on that trip.

As of late she has been very interested in these ancient peoples. She will often ask where these cliff dweller people lived trying to piece together their location. Although she is fascinated with cliff dwellers I don't think they were discussed much in her lessons. She always wants to clarify the building materials used for their homes. She talks of adobe domes and somehow she can't figure out the complex buildings created by the cliff dwellers. We're going out to the Southwest this summer and I hope we'll have a moment for a stop at a site, any site. It would be great for her to see the differences to learn that although they were a large group of people they were all individuals. Each group had its own needs and resources. That is one of the hardest points to address. With a modern outlook on life she is still trying to see how 50 miles made that big of a difference in the societies. I think once she sees the desert Southwest and feels the heat she'll understand. Those peoples living in Arizona were very different than those living in the Southwestern section of Colorado. Elevation and precipitation were the significant factors in their successes. This is a very interesting subject for her to continue learning about.

To make this project she picked out a shoebox for its base. She found a great box where the lid was attached at the back which made it a perfect "cliff" shaped box for this project. At first we were not quite certain how to make those cliff dwellings for inside the box. She wanted to use clay or a dough to construct the varied structures. I was not too sure about that idea. Thinking about how she has to be able to take it to school, walking a few blocks, it needed to be light enough not to be a burden. Stability was another issue. It needed to be able to withstand the curious hands of her peers. Lopsided clay was not going to be an easy one to adhere to the shoebox. We settled on using a box to make the cliff towers. We thought that maybe we could find several different shaped small boxes to replicate the irregular buildings. It was a great idea except we couldn't find enough small boxes to suit her scale. Running out of time we chose to use a pie crust box. It was thin, long and its dimensions made it the perfect fit for her shoebox base. She painted the box a nice shade of brown which we mixed to her taste. It had to be the proper shade of brown. That box required 3 coats of paint to give it a nice adobe look and feel. While she waited for the paint to dry she worked on covering up that shoebox. She picked a nice orange construction paper to be the sandy ground. We used double sided tape to stick the paper on the outsides and insides of the shoebox. Glue was used for the inside bottom portion. We took a trip to the local craft store chain to seek our extras. She wanted cactus and grasses and a bunch of other things. We found a small Southwest kit that had the cactus and grass she envisioned. We also picked up some small pine trees. At first she wouldn't accept those trees claiming they did not belong in the desert. I showed her our picture again and pointed to the numerous pine trees surrounding the cliff opening at Mesa Verde. To help detail the diorama we needed to glue together some of the cactus as instructed in our craft kit from the store. We let them dry for a day to make sure they'd hold up. It was a few days later when we began to assemble this project. I drew small varied shaped windows on her painted box. I used a pencil and drew lightly. She traced over my penciling with a black permanent marker. She filled in the windows to make them look more shadowy like our pictures. Those little windows helped make the pie crust box look more like a varied structure. We used more double sided tape to secure her dwelling into the back part under her "cliff" box. Since the pie crust box was so light the tape really made this a gluey-mess free project. Next we took the grass mats from the Southwest craft kit and glued it the top of her shoebox. She wanted to make some corn or squash to make it look like the farms on top of the mesa. Lack of time and interest put that on the bottom of our needs. The grass mat made it look a little like it could be a farm. I told her to tell her class during the presentation that the green stuff is the beginnings of the crops. She then used the craft glue to place her cactus and trees in the desert area of her box. When it was done we let it dry and moved on to writing her paragraph about these people. She looked at our pictures and we visited the Mesa Verde website to learn a little bit more about these special people. I printed out her paragraph, she cut it to size, and then taped it to the backside of the shoebox. Amazingly it made it to school without any mishaps.

She got a 100%! She was the first kid to present her project to the class and the teacher was pleased she learned so much about cliff dwellers. Her confidence in answering questions really made the difference. She was prepared and enthused to tell her classmates all about her project.
Email Post
Labels: Children Craft-a-Go-Go Education Olivia