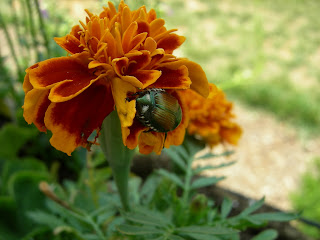 It's that time of year again when these little buggers come out and eat everything in sight. I found 2 on my raspberry bush this morning. Two happy chomping beetles. Chomp, chomp, chomp, putting holes in the leaves. Big holes leaving little evidence save the veins. It was a sad sight. Only half a dozen leaves have been damaged but it won't take long for that number to increase triple fold. What this means is our garden is under attack. I noticed something has been tasting our roses too, perhaps the Japanese beetles have been there. So far this morning's garden check only gave the 2 suspects. Good I guess. But I think it's really the calm before the masses.

The problem with these jerks is that they are darn hard to kill. Everything that kills them will also kill those beneficial bugs you want to come to your yard. Since I do not want to kill off the good guys I'm going to have to set aside the major chemicals. To be successful without massive carnage of the good bugs I have to be meticulous and patient. I'll try using some castor oil soap. Spraying the leaves in the early morning will need to be done every day. Plus there's the whole needing to pick off the beetles and drown them in a bucket of soapy water. Still no matter what I do it will require a lot of work. Good thing I like to get up early.

The other things we need to continue are the killing of grubs lurking in the dirt. We've been treating our lawn with ::GASP:: a lawn service company. So yeah, that's not organic. The treatment has been working because the population has been going down every year. (This treatment has gotten rid of our tick problem too. So worth not being organic.) The problem is that we have a whole bunch of forest surrounding us. Perfect hiding places for beetle grubs. That's where our problem begins. I think we'll try some more biological treatment such as getting a milky spore population started in the woods. That will take a long time to take effect but it's the most reasonable way to offset this problem. There are other options such as wasps but with kids all around that one seems a bit dangerous. We already have a good wasp problem in these parts adding more is not what we want.

I wonder what Keith will want to do this year. He always takes the Japanese beetle attacks so personally. He becomes fanatical with his killing them off. It should be a fun time seeing his new ideas.
Email Post
Labels: Garden