There has been much to do, nothing major, just little things. There are those ordinary chores that have been set aside for so long that now considering the baby will be here in mere weeks I am feeling the need to tidy up a bit. The dusting is in need of being done. The tufts of fuzz lurking under the couch have been driving me mad, as well as those balling up in the corners of the rooms. The woes of hardwood floors continue with my lack of actually mopping them in weeks. I just can't bring myself to lug a bucket of water around and stoop over a mop to scrub the floors. Yet it bothers me to see those floors in need of a cleaning once over. I feel like covering my eyes as I walk around on the main level. I can't do that so instead I am reading to avoid seeing those chores to do. It's willful avoidance. Shameful avoidance? Ahh it's something alright.

So instead of doing those sorts of chores I opted for some cooking. A week's worth of stone fruit have been lingering in our fridge uneaten. Not sure why. Plums, peaches, plum-cots all are pleasant desires for our fruit cravings. Yet they remain untouched. I'm blaming that watermelon. The watermelon with its cool juicy refreshing-ness has just taking our fancy on these last very hot days of summer. We have been neglectful of those other fruits letting them sit lonely in the fridge. It's so unlike me to allow a peach to idle. Despite my beliefs and lack of attention those fruits must be dealt with. Since we're, as it seems to me, uninterested in eating them before they go bad something had to be done. Not one to be wasteful I decided that I should just go on and make some jam with those fruits. Put them to good use. I like finding a use for things when avoiding housework. Putting me to work making me productive instead of idle is good. Just so long as it's not mopping the floor. Not that I need to be overly productive at my 38th week of pregnancy but for someone like me to be un-busy is rather odd. I rationalized my plan as being both frugal and small. (mopping is such a large job) There was only a small amount of fruit which meant that the level of work required would not be difficult to do. Plus think of the reward! A clean floor is nice but homemade jam now there's a very pleasant delicious reward. Also jam can be shared, clean floors they just look good for a day.

I'm glad my Great Aunts sent me home with several boxes of canning jars because the supplies on hand made the jam making process so much easier. I grabbed two boxes of 8oz jam jars, 24 jars total, to wash and prepare. This is why having a dishwasher is so advantageous. While the jars, lids and rings went for a wash I prepared my fruit. The peaches were so very ripe almost overly so that peeling them was easy. I just cut them in half, pulled out the stone and then sliced them into quarters. From that point I used a paring knife to remove the skins. Once they were all peeled I chopped them finely and tossed them into a bowl with lemon juice. I moved on to the plums. I trimmed the tops off, sliced them in half, removed the stone and chopped them finely. For plum jam you do not need to remove the skin, it's quite alright to leave it be, besides it's a dreadful waste of time. It could make you crazy peeling a plum. They have little substance to them to begin with so you'd need triple the amount to get the same result with the peels on. I tossed them into another bowl with lemon juice. There was a slight problem. I didn't have enough plums to make a batch of plum jam. I have been dreaming about plum jam but did not expect that I'd be so short of the fruit. I had half the amount required. I needed 4 cups total. No more plums, not even a plum-cot to spare either. I did have plenty of peaches though. So.....I just decided to use half peach and half plum to make a batch of plum-peach jam. I'm all about the improvisation. 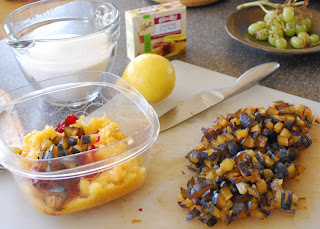 Two batches of jam later and all is well with the world of productivity. The fruit we love was saved from waste and I had something to do part of the day. I must say come this winter those jams will be very much appreciated. Just by opening a jar the burst of summer will warm us with that fragrance. The only problem is to make sure we won't eat the jam before the winter sets in. Of the samples Leah preferred the plum-peach jam. I have to agree it was rather impressive. The recipe will be posted as soon as I get it typed. Why should I keep it from my fellow procrastinators? I see it as a service to all my beloved non-mopping friends out there. 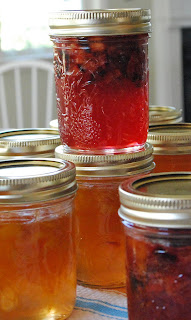