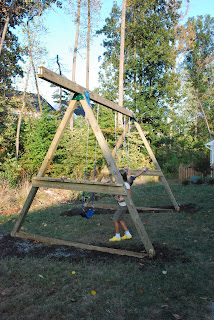 Of all the things the girls have been asking for it has been for swings. They love to swing and finally that wish has come true. For some time now we've debated over a swing set or play house or even a combination of the two. The basic reality is our back yard cannot accommodate something too big. A combo set would be too large. For as much fun as a playhouse sounds it became clear that it would not be used as much as a swing set. That's the plain truth. So those great ideas about little houses with lofts and window flower boxes have been pushed away. Instead Keith and the girls focused on designing a swing set. After of months of searching various manufacturers the decision became clear: they are far too expensive for something so simple. What we learned is that the best swing set for us was the one that Daddy could build. He searched for the proper kit which includes the swings, bolts, braces, etc. It was ordered and we expected it would arrive far later than it did. With everything here on Friday it was determined that this weekend was the weekend for building the swing set. Early Saturday morning he began the work. He dug out the holes for stabilizing the swing set. After that he bought the wood. Most of the day he cut wood and measured. Our friends came over to help out. With the two guys working the process went faster. By the end of Saturday the structure was built and ready to be flipped upright. That took a little more help from some neighbors. They safely managed to set it up proper, with no injuries! Always good.

Then there was the dancing. The girls danced with glee super-de-duper happy to have the swing set. There was still some important touch-ups to complete on Sunday. But we let the kids give it a try gently. By Sunday afternoon all was complete. The swing set was secure and ready to be used. The lines formed and kids jostled for a turn. Even this morning two little girls managed to squeeze in a before school swing. I think that there will be much swinging around here. There will be a baby swing in the future. For now it will be full of the big kids swinging high into the sky laughing loud.
Email Post
Labels: Family Life Fatherhood Husband

Anonymous said…
I can't believe Keith went the saftey route and secured it to the ground- he was the leader in seeing who could make the swing set tip! Laura
11:34 AM