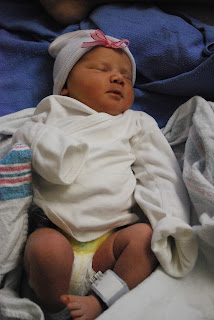 Adelynn has been full of surprises. She began right away. I went to my check-up appointment thinking that the count down is beginning. A few more days and our baby would be here with us. I fully expected to get the time for my surgery set and would leave knowing I had so much time to prepare. That was not the case. Last Thursday night after a full day of must do errands I began feel exhausted. It wasn't long thereafter that I began to feel contractions. Not just one here or there. These were the real deal. The type of contraction you feel through your spine. I just figured it was due to all my running around getting stuff done. I went to bed early feeling that I still needed to do more. There was laundry yet to fold, plumeach jam I needed to make, a crib to set up, so much more. Before bed I felt an unexplained urge to get pictures of the girls with my belly. I had meant to get some pictures of Olivia kissing it. She kisses the baby goodnight and I wanted to remember that moment. Being so tired I didn't follow through. I really wish I had. In hindsight my mind knew that was the last night of my pregnancy.

I went to bed wondering if my contractions would get stronger or just stop. I suppose they stopped as I didn't wake until the alarm went off. Since I had a check-up Friday morning I figured that there was no need to be concerned about the previous night's contractions. I felt pretty good, tired but good. At the doctor's office I sat in the waiting room and was uncomfortable. I was beginning to contract more making those hard chairs seem so much more intolerable. I was called and followed the nurse to have my vitals taken. Usually it's no big deal. My blood pressure is usually low so I didn't think to be worried at all. Or. At least until the nurse looked at me with a concerned expression. She asked if I felt ok, was I seeing spots, was I light headed. Nope. Nothing. Felt fine besides the contractions. She reported my reading of 148 over 90. Which is high for anyone. It is especially not good for a pregnant woman who normally has a 120 over 70 reading. I was developing preeclampsia which is never good. I did not look like I was swelling but I was, I just didn't realize it until later that day. I went to see the doctor. He examined me and decided that the baby would be born that day. Certainly not what I expected to hear. I was all ready to get my surgery time set for next Saturday. I had not been prepared to hear that our baby would be born by the end of the day. I didn't want to worry but it seemed that everyone else in the office was worried for me so then I began to worry.

Besides a million things left undone I was faced with the problem of what to do. My blood pressure was too high for me to drive anywhere. I felt tied. Trapped. I was told to go straight to the lab for blood work and then up to labor and delivery to be prepped for my surgery. My doctor would be there after he finished his patients' appointments. So it seemed like an emergency but not entirely. I began by calling Keith. I didn't know what we were going to do with the children how we were going to juggle watching them and being in surgery. Keith grabbed a cab to meet me at the hospital there we figured out a plan. He went home to get the children and my suitcase. He'd figure out what to do with them later. While he drove home I attempted to go to the locations I was told to go and have my blood work completed. That was not as easy as I thought. It was an hour of me wandering the hospital halls trying to find the place to be. No one agreed on where I should go. Finally I just went to labor and delivery. I figured they'd know what to do. Hoped they would.

They did. Thank goodness. I was beginning to become fatigued from all the walking and the lack of anyone with a brain to help me. I was taken to the prep room where I remained until my surgery. There were several other women there waiting too. That's when I knew it was going to be a long day. I learned that the girls would not be able to be with us. They couldn't even wait in the waiting area without an adult. So much for a family moment. By that point I was getting more stressed and my blood pressure kept rising. I couldn't help but worry about the girls and how they were going to be a part of all this. This baby is important to them too. Finally Keith arrived and I got the peace I needed. Keith left the girls with a co-worker who lived down the road from the hospital. The co-worker would bring the girls once we began surgery. It sounded good to me and that's the relief I needed. While we waited for our turn in surgery Keith read his book and I napped a bit. I wanted (needed) to lower my blood pressure as much as possible. A little before eight o'clock I was given the notice of us being next. The next hour blew by with the formalities and procedures of surgery.

It didn't seem long before Adelynn was born. We were in surgery the doctors and nurses buzzing around us the only noise their voices and the medical equipment. Then the long pause before that baby cry was heard. She came out fighting and strong. Keith was so excited. He always pauses not sure what to do. Stay with the wife or rush over to the baby. He kissed me, thanked me and dashed over to Adelynn. Being an experienced Dad this time he knew not to touch Adelynn until the nurses gave permission. He was so eager to hold her. As she was getting cleaned up that strong cry was heard. A very reassuring sound after a very stressful day. Because she was born so late there was little time for visitors. Leah and Olivia were able to see her from the nursery window but only for a few minutes. I was in no shape for visitors as my exit from surgery required about 2 hours of recovery. We were left with the excitement of a new daughter but had to put our family time on hold until morning. That's the loneliest part of birth and hospitals. Everyone wants to be together but it's not possible. I was able to rest for a few hours before Adelynn was brought to me. She was hungry and took to nursing immediately. I was surprised by her petite-ness. In comparison to the girls she was so small. Still at 7.5 pounds a decent sized baby. I looked forward to the morning when the whole family would be together to see the girls take in their baby sister. Those were the dreams that filled my head that night.
Email Post
Labels: Baby