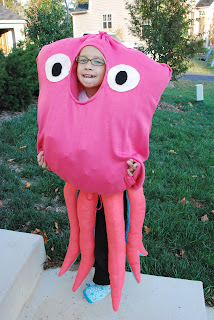 So Halloween. Every year we have such fantastic ideas for costumes and before we can get it together we've run out of time. Not this year! That did not happen. Although we've taken a different path than originally planned. Olivia's big costume idea was a polar bear. Great idea. It was in our minds easy but reality made it clear it was not. Lack of time and supplies made that idea get placed on the maybe later list. Instead we found ourselves going into a different direction. All unexpectedly. I knew Leah wanted to become a bumblebee. Not a bee princess as several costume makers and stores think a little girl wants. She wanted to look as close to a bee as possible. I took to the interwebs to check for a costume. Turns out that any bee costume for a pre-teen girl is going to be one of two things: lame or risque. I decided to buy her an adult sized costume. It was the only one that looked exactly like her description. I might add that she was very pleased with the costume but was disappointed that it wasn't furry. Why? Because "bees are furry so pollen will stick to them" she tells me. The only flaw is her costume is not biologically accurate. I think she's over that because after the box arrived she put on the costume with such pleasure I thought it'd never come off. She didn't want to take it off. We compromised. I allowed her to keep the headpiece on while she completed her homework. Because I had to find Leah's costume online I figured I could find something for Olivia. I was upset to see that you could find polar bear costumes for kids under the age of 5 but after that nothing. There are hundreds of vendors who will sell you a costume for several hundred dollars. These are very realistic but certainly not in my price range. Plus they are adult sizes only. After looking around with a fussy baby in my lap I determined that the polar bear was out. 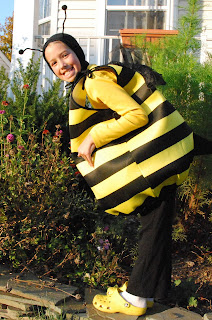 I found Leah's costume on the Oriental Trading company site. There I found the one thing that I knew would woo Olivia away from the polar bear idea. I found an octopus tentacle belt, for $2.99! Can you believe that? I couldn't. I knew I had to get that belt. Even if she still wanted to be something else that belt was just the thing for my octopus loving girl. I couldn't even make something like that for that price. I was very pleased with my find. I knew it would be the perfect costume for her. In my mind I was putting together the costume. I figured that all we needed was an over-sized sweatshirt in a compatible color which could be stuffed and adorned with felt eyes. Simple. It was a genius idea. While Aunt Laura and Great Grandma were visiting this week we stopped over to the thrift store to seek our sweatshirt. I could not believe our luck when Aunt Laura found a salmon pink sweatshirt with a drawstring bottom. Drawstring bottom! That was the most perfect aspect of the sweatshirt. It saved us from sewing that feature into the costume.

Giddy with our luck we got to work figuring out how to make an octopus head out of the sweatshirt. Olivia's only request was that she didn't want two heads. As in she was not interested in going the easy way. I was hoping easy. I thought we could just glue felt eyes on the sweatshirt and stuff it with poly-fil to give it bulk. She liked the stuffing and eyes part but she did not want her head to exposed. As we three ladies thought about the costume and Olivia's request Great Grandma came up with the plan. Since the sweatshirt had two drawstrings, one at the neck the other at the waist, it was going to work out perfect for the no two heads option. We tied off the top drawstring. Next she suggested we cut off the arms and sew them shut. To solve the problem of Olivia needing hands to hold her treat bag Great Grandma told us to cut out the pockets. Brilliant! That was such a great idea. Olivia would be able to tuck in her hands or put them out as needed. Next the matter of being able to see. We decided that cutting a face hole in the front between the eyes was the solution. Great Grandma and Aunt Laura created a hole and added a drawstring so that we could tighten the hole around her face. Because the sweatshirt was still large we needed to stuff the upper shoulder portion to make the eyes more pronounced. We stuffed the removed sleeves and sewed them along the shoulder seams. This gave the head more bulk at top to accentuate the eyes and provide roundness. For the body region we used small toss pillows to fill in some bulk. The costume could be more bulky but the biggest issue is being too hot while wearing it. Our warm Fall is not the best for something this insulated. So instead of being perfectly stuffed we are going for substantially stuffed.

Somehow I think that Olivia will want to wear this more than for Halloween. What a great costume this turned out to be.
Email Post
Labels: costumes Crafts fall Leah Olivia