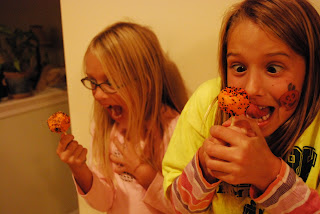 We made some cake pops the other day. It was the result of having an excess amount of frosting left over from the party last weekend. Aunt Laura thought that making these treats would at least use up a good amount of that frosting. It did but we still have plenty more to use. I'm thinking cinnamon rolls, but that's a different post altogether. In the process we learned many things. First using cake and frosting and then coating the balls in candy melts makes for a super sugary treat. It's candy sweet sugar overloaded goodness. The process was simple. Make a box of cake your choice of flavor. Let it cool. Crumble the cooled cake into a large bowl. Add enough frosting to make the mixture almost dough like. It has to be wet enough to be able to be balled up and retain its shape. Place lollipop sticks into cake balls and chill in the freezer (or fridge) overnight. Prepare your candy melts and then dip the balls. You can add sprinkles and other candies to decorate. Allow them to chill in the fridge until set. We used egg cartons turned upside down poking the sticks inside as a way to hold them upright. A block of Styrofoam or a foam floral ring would be handy for that indeed. Package them up in plastic bags tied with a ribbon and give them away. Seriously. You do not need to have 40+ of these things in your house. It's a bad idea. Too tempting. Anything on a stick is fun to eat and boy howdy is it convenient.

These are a great treat to make for parties. The girls were so excited to see them all complete after school. They wanted to eat them all. Most of these were meant for the Halloween party this past weekend so they had to restrain themselves. Originally Aunt Laura was going to make black cats and pumpkins like these. That didn't work out as she discovered that would require a lot more work to make them especially with out edible ink pens. She opted to just dip the cake balls and add sprinkles.They still look good. Really, I doubt the kids were upset that the cake pops were not pumpkins. I think it was more like "Cake Pops Yay!" followed by gobbling sounds.

I found these cake pops to be too sweet for my taste. I'd like it better if the cake was made without sugar. The frosting is sweet enough on its own and would sweeten up the balls perfectly. I might have to experiment with a sugar free cake to see if it makes a difference in taste. Making these would be great fun with children. They can help you roll the balls and add the sticks. It's not unlike playing with dough and is a great way to speed up the process. The dipping part might require more adult steady hands but the sprinkles are a job for kids. After going through the process I've even suggest my cheaters step: buy doughnut holes. If you could find unglazed doughnut holes half the process is done. All you'd need to do is add sticks and dip. Although I think that to ensure the sticks affix to the doughnut holes dipping them in the candy melts and allowing to cool will add more stability to them. Still it's a faster way to fun.
Email Post
Labels: In the Kitchen