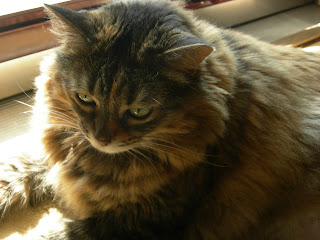 Our dear little kitty passed away today. She had been feeling unwell for some time but this past week she just was in terrible shape. It has been a difficult 3 months seeing her health decline. For about 2 years she had been dealing with arthritis in her hips which we were medicating her for ease of motion. Even with that pain she still managed to keep up her spirits and be our kitty. About a month ago we think she had a seizure. It could have been a stroke because after that she began to decline. Her reflexes greatly slowed down and she was often disoriented. I knew things were getting bad when she would get lost in a corner of the living room. She be stuck there until someone rescued her from the confusion.

We took her to the vet yesterday to see what was making her sick. We noticed that she had just stopped eating and drinking. Never good. After several tests it became less clear as to what was making her ill. All her blood work came back clear. Healthy kidneys, lungs, heart, thyroid etc. She stayed overnight to take IV fluids to rehydrate her. Unfortunately that was not enough. She began to have difficulty breathing and her body temperature dropped. It was her body shutting down. Without an autopsy (which we declined) we won't know what caused her death. The vet thought that considering the quick onset of her decline that Gaea must have had some for of lymphoma. That would have been difficult to test for without more intensive equipment. We chose not to continue searching for answers because Gaea was clearly dying. When we arrived she was hardly responsive and was unable to stand or really move. She was letting go and so we had to let her go.

The death of a family pet is never easy. The girls were deeply saddened by the loss. Gaea has been around for nearly 14 years. She was there from the birth of each of the girls. A great family protector she made rounds every night (up until a month ago) checking in on everyone while they slept. Although Thursday night was her last rounds. While feeding Addie I saw her making what was her last trip checking in on Leah and Olivia. I picked her up and put her on her bed because I knew it was a rough going downstairs for her. If only I had known. Now that she is gone I am seeing the signs. All week she spent time sleeping in her favorite places. The sun in Olivia's room, the pile of clothes in Leah's room, and by my bedside. Gaea knew she was not well and she wanted to tell us good-bye. Too bad we missed those signs and didn't give her that comfort she needed. She was well loved and will be dearly missed.
Email Post
Labels: The Cat

Judith said…
So sorry about Kitty Gaea. She will be missed.
7:49 AM

Anonymous said…
Gaea was always a good cat. It is a quiet house now.
8:42 PM