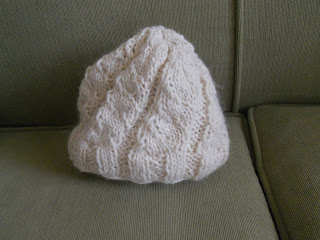 I knitted one of these months ago. I made a teeny-tiny newborn sized hat for Adelynn. She wore it for a few weeks. I was not quite certain on the size. If I had been thinking clearly I would have known that hat was too small. Now that I consider its size it's more of a preemie hat. The hat has been tucked away with all that 0-3 months baby stuff to be a little reminder of how small she once was. Since I liked that hat pattern so much I decided to make another for a friend. Their daughter was born last summer shortly before Adelynn. I was supposed to have it done by Christmas. Never happened. Lofty goals of a sleep deprived Mama. I thought there would be more time for me to knit not anticipating how much Adelynn needed to be held. I tried to get in a row at a time. All I managed was the ribbed edge. It was a start. At least I got some of it done. What that did was constantly haunt me to finish it already. Last weekend I decided that was it. That hat was going to be finished or else. I was able to knit this hat between her naps and while Keith held Adelynn during weekend basketball game watching. Not as easy as I hoped because when you want to do some thing that's when a baby will keep you from it. At least that's what it seems. Once I got going the hat knit up quickly. I love the pattern its flow really jives with me. I like its simple yet elegant look. You can find the beaufort hat pattern here.

I really love this hat. I have another on my needles ready to go. The new one will be for Adelynn. She will need a new hat for the winter which is now so far away. In the meantime I should have plenty of time to get hers done before she will need to wear it. Oh I say this and I mean this but it actually happening is quite another thing. Have you seen my project baskets? No? Well you shouldn't. Really you should not see the madness of my knitting distraction. So many projects. Unfinished projects. I have so much going on that if I were to start working on them one by one that I'd have enough to do every week until the end of 2011! It's a sickness I tell you. No matter. I still press on little by little finishing what I want as I need. Although I should stop starting new projects. 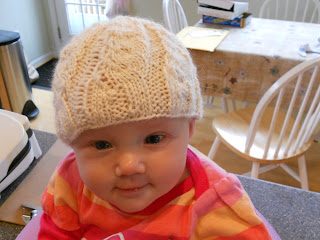