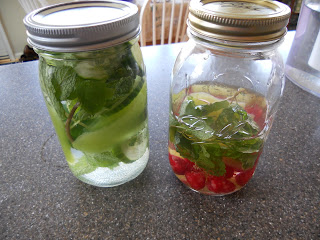 I've been working on making my own flavored water. This is a way for me to make sure I'm drinking the much needed water to maintain my milk supply for baby Adelynn. I've always been a good water drinker but when it's still cold out I'm not quite as likely to drink up. My experiments thus far have been mixed. Some good some not so good. I really liked my honeydew cucumber mint water. The raspberry mint was not such a hit. I'd love some raspberry goodness but I can tell it's going to take some practice. I'll try a raspberry lemon or lime next time. I think the trick will be making a strained puree of the berries to mix in prior to drinking. The successful tries are below.

Cut a small cucumber into slices. Place cucumber, a few wedges of peeled honeydew melon, and a handful of mint leaves in a large pitcher. Fill pitcher with water. Cover and chill several hours or up to 3 days. Strain mixture; discard solids. Drink water within 2 days.

Cucumber Ginger Mint Water
Peel, seed and chop a small cucumber. Peel a 1-2 inch piece of ginger root, roughly chop. Add cucumber and ginger to the bowl of a food processor. Puree together. Add puree to a pitcher of water, juice one lemon and stir. Cover and chill several hours or up to 2 days. Strain mixture; discard solids. Drink water within 2 days.
Email Post
Labels: In the Kitchen Recipes

Anonymous said…
Have you tired Celestial Seasonings blueberry or strawberry teas? They are amazing iced w/ a little bit of honey.

Judith said…
I found a wormhole to get to your blog at work! Hee hee.

I'm glad you used the jars--I was thinking I'd need to get an infuser pitcher.
1:35 PM