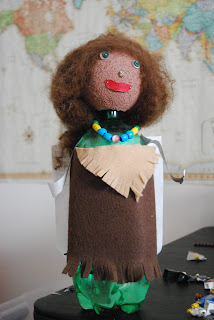 This project was part of an assignment for the first grade's lessons on famous Americans. Every student selected an American from a significant historical figure to an actor. With that sort of freedom the project can become very exciting. Almost too exciting. Thankfully my first grader opted to steer clear of the other girls' trend of selecting a Disney Channel actress. Though her choice of Pocahontas was not far from the Disney grasp. Pocahontas in her Disney-esque image was what Olivia had in mind. What could I expect from my little princess? Fortunately she was thrilled about making Pocahontas and as far as I'm concerned enthusiasm is a fantastic motivator.

To complete the project there are only a few requirements. The buddy must be an American, the buddy must be made from a 2-liter bottle and a short written paragraph about the American must be included. It was very simple. We are not soda drinkers which meant I needed to go and get the bottle at the store. I suppose I could have asked a neighbor but we all have elementary aged kids and those bottles are a hot commodity. That was the most difficult part of the project: to drink the soda in time so we could use the bottle. Before moving on with the project Olivia and I went to the computer to look at some truth about Pocahontas. Our first stop was to check out the Jamestown Settlement website. There is a tremendous amount of information on their site. For more information about Pocahontas please check out this page and this one too.

After searching our craft bin for supplies we were ready to get started creating Pocahontas. We used brown felt for the dress which Olivia fringed the edges to make it appear more appropriate. I hand sewed the felt dress together to fit around the bottle. The head was a Styrofoam ball from the craft store which Olivia painted brown. Olivia drew a small mouth on paper which we pinned using sewing straight pins to the head. She also drew some arms to tape to the bottle sides. The small buttons Olivia chose from my button tray were used for eyes and nose. The hair is wool roving doll hair which was found at the local thrift store. We pulled it apart to fluff then I hot glued the wool to the head. While I used the hot glue gun I had Olivia make a wooden beaded necklace to finish the look. She taped the necklace into place to keep it from slipping off the bottle. Overall it was an easy project and she enjoyed making her bottle buddy. Now that we have it home I'm not sure what to do with it besides tuck it on a shelf in the basement playroom.


Editor's note: wrote but never posted this entry since it was months before the bottle buddy made its way back home. Thereafter it was misplaced making it difficult to photograph. Since now is prime school project time I thought it would be nice to post this so that others can see the things that children create. It was originally to post on 3.15.09 during Olivia's first grade year.
Email Post
Labels: Children Craft-a-Go-Go Crafts Education Olivia Sewing