Making a biography puppet was not what we expected when the biography research report project was assigned. It was a welcome relief from the standard paper based work. Considering all those standardized tests coming up too this project at first seemed like too much at once. Once we read the assignment we sighed in relief.** A fun! fun! fun! project to break up all that serious test prep.

The puppet base was made at school which saved us a great deal of time. That alone would take quite a bit of working on to get right. I took pictures so you may see the bones of this project. It is quite a fascinating puppet design. I think the puppet base would make a great project for fun rainy day. We may give this a try over the summer to pass some time from those sweltering days. This would certainly be a great addition to the little theater in the basement. As you can see the base is an extra large paint stir stick that can be found at a local hardware store. The pattern was traced on to manila folders or even some poster board would do. The form was glued and taped to the stick. The tricky part is getting the puppet's jaw rigged with rubber bands. This takes a gentle touch as too much yanking will certainly cause tearing on the paper. Once your puppet base is complete you can create your person. 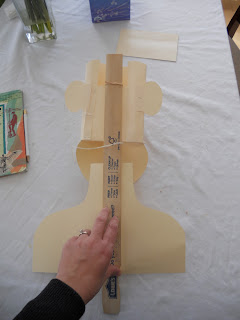 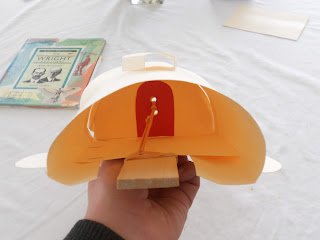 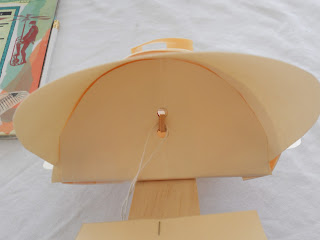 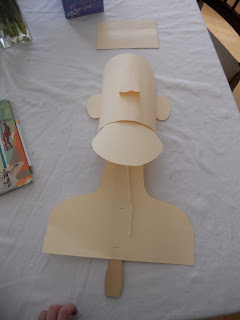 Each student was able to choose a person to research. It has to be a person who is remembered for making a difference in our world. This person should also be a figure of inspiration for other people, even the student. There was no limitation on selection. This person can be from any part of history, from any part of the world, living or dead. It was recommended that each student choose a person who inspires, intrigues and or amazes them. The requirements were simple: a written report, create the puppet person, and present to the class. A short research paper written about the person including facts about their life as well as their significance to the world. The report must use one book as a resource and include a bibliography page. The fun part is creating the figure with your own personal touch using all sorts of craft supplies found at home.

As easy as this project seemed it had its challenges. First getting my 10 year old to decide on a person was difficult. She kept suggesting people she already studied in past projects. We rejected all of those suggestions. An easy out was her idea of getting this project over and done. The point is to really think about who inspires them not choose somebody randomly. My daughter just has not quite come to the realization of how lucky she is to have a teacher that gives such a broad choice for a project. Next year Leah will wish for this freedom. After several rejections we were getting frustrated with each other. Leah didn't want to think about schoolwork when a sunny day beckoned. Finally the name Wright came up. Wright as in the Wright brothers. It was settled. She narrowed it down to a guy. At least we had something! I took a trip to the library and selected a few books about the Wright brothers. I left her to decide which brother she wanted to focus her report on. Leah chose Wilbur Wright. She chose him because he was a curious, determined, hard working, and older brother. Perfect for her an older sibling. She read the books and checked out a few websites for additional information.

I was pleased she made a decision about this project. Wilbur was quite an interesting person. I think by reading about him she was able to put some of those pieces together from all the places we visited. We have been to Kitty Hawk, NC to see the location of the first flight. We have been to Dayton,OH Carillon Park to see the replica of the plane as well as the bike shop. And there is the Smithsonian where we have seen the actual first plane. Reminding her of these places helped her think about Wilbur differently. Not only that but her very own great-grandmother lived near the Wright home in Dayton, Ohio. Having that sort of connection is exciting for children. I wish Granny were around to tell some stories because I just can't remember them all.

Writing the report began slow. Leah kept hoping that some magical shoemaker's elves would emerge to write the paper for her. When she realized that was not happening she had to get down to business. Oh, there were tears and rants and everything in between. Weekend homework is not a welcome addition when you have a warm spring like day to enjoy. To help guide our little procrastinator we broke down the to-do into simple chunks. She needed to write an introduction paragraph. Next she needed to write three informational paragraphs. This we broke into life sections. She wrote and early years paragraph including the basic when and where born, what he did as a child, where he spent his time, etc. Next we guided her to write about his middle years. This is where most of Wilbur's life work occurred. The fun invention part of his life. Lastly Leah wrote about the final years of Wilbur's life. Wilbur Wright died young (45) of typhoid fever which meant that there was not too much to include in this portion of the paper. Finally a closing paragraph where Leah wrote about why Wilbur was an important person, what he was remembered for doing. All of this seems so simple but getting Leah to keep writing was challenging. She started off slow working to make this paper perfect. When we realized that she was struggling to make the paper perfect we had to change the process. We had her write what she remembered. We stressed that getting her thoughts out was the key not making it sound perfect. Writing can be a struggle so reminding her that each paper is written in drafts helped her see that it was okay to write freely without concern of the final product. Letting her sit and type was what she needed. In the end she did quite well when she wrote one paragraph at a time. By seeing this paper as a series of small paragraphs she was able to focus on writing.

Creating Wilbur took some thinking. Leah wanted him to wear a Derby hat but trying to make one was not so easy. In the end she opted to go with out. She created a simple black construction paper suit with a tie. It was styled after a photograph that she found on the NASA website. She penciled in some hair on the sides because he was bald. She drew some eyes and glued them on the face. If she had more time we could have added some significant features that would make him more noticeable as a Wright brother. Maybe a small airplane model in a breast pocket. 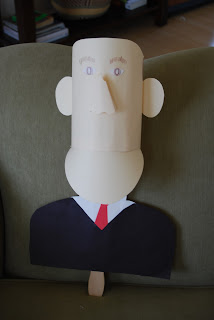 For a child like my Leah who is nervous while in front of groups the presentation is the most challenging aspect of this project. Presenting the puppet was intended to be easy. A list of questions was provided to give the presenter an idea as to what to tell the class. The presentation was meant to be more of a telling of the puppet's story. By answering the questions the presenter was able to inform the class about this important person. A very clever way to present information. The class presented their puppets in groups. Each one in turn during their group. There were featured athletes, political figures, ancient history and mythological figures, historical breakthrough figures, animal activists, featured authors and featured musicians. I really liked how the teacher broke these figures into groups making it flow so well. There was so many creative takes on all of those persons. It was a fun way to learn about important people in the world. Also, who wouldn't enjoy performing a report with the aid of a puppet? That was certainly fun to watch the children work the puppets' mouths. I think we'll be keeping Wilbur around just for our own entertainment. 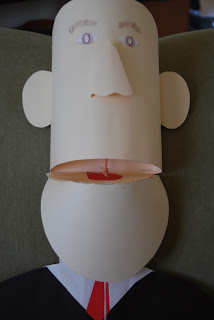 **Editor's Note**
I am providing a copy of the instructions for the project on my Drive. Instructions are for implementing the academic portion of the project in class. This does not include how to make the puppet. The link to .pdf instructions: Muppet Biography Project
Email Post
Labels: Craft-a-Go-Go Education Leah School

Carolyn said…
I do remember Granny saying that she helped her brothers deliver newspapers to Orville Wrights house when they were kids. I don't know if she actually met him,but that's just another one of those many questions I wished I had answers to.
10:41 AM

J. Dyer said…
I would love to recreate this project with famous scientists - do you have a procedure?
7:20 PM

Yvonne said…
I don't have a procedure for this puppet base. That portion was made at school. All I could determine was that they used file folders, paint stir sticks, staple gun, hole punch, and rubber bands.
3:03 PM