It is jam season. Our first batch of jam for the season is complete. I put off the task long enough. The fresh picked fruit will last only so long before it has to be used or frozen. I wanted to make some black raspberry jam but since I ate about a pint of those berries I picked I was short some fruit. Improvisation! That's the answer to many kitchen problems. Instead of plain black raspberry jam I decided to make:

It's going to need a better name than that long super descriptive one. I think summerberry jam is a better name. It tastes wonderful but the batch could have used another 2 cups of sugar to help set it up better. Which I know has to do with the pectin I used. Every time I use Sure-jell I need to use at least another 1-2 cups more sugar. (Blast you kraft) I am not a fan of that brand. I prefer Ball brand as it has NEVER failed me in any of my improvisational recipes. Let that be a lesson to you jam making fans; know your pectin. I had to make due with the Kraft brand because apparently all those other crazy jam makers out there in my town have bought up all the Ball brand. See, that's what I get for being slow on getting my supplies in order for the season. Don't worry I'm ordering the MEGA size of Ball pectin to prevent any mishaps.

The summerberry jam's consistency at room temperature is like that of a fruit sauce, glace-like. That's fine with me as the taste is not affected. I think this jam goes will over some soft cheese and crackers. I know it would be great basted over some chicken, fish or pork. Or ice cream. It would be very good over ice cream. 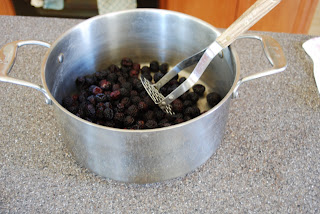 First I tossed the washed black berries into my pot. Using a potato masher I mashed up the berries. Next I tossed in the blueberries and mashed them up a little more. I zested a lime and then I added the acid ingredients, 2 tablespoons balsamic vinegar and the juice from half a lime. I gave the mixture a good stir. 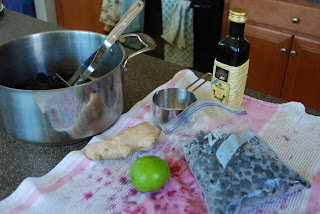 I grated 2 tablespoons fresh ginger tossing that into the pot stirring again. I poured the full measure of sugar into the pot and placed it on the stove. Turned on the heat to high and began to stir the jam until the sugar melted and began to boil hard. I added my pectin allowed the jam to return to a hard boil stirring the entire time. After about 2 minutes I turned off the heat and let the mixture cool a moment. At that point I knew it was a bit runny and should have added more sugar but, 6 cups is a LOT of sugar and really does a jam need 8 cups? 8CUPS?! I think not. So I pressed on. I was able to get 10 and a half pints of jam from this recipe. I will give this a try again next year and by then I should have the proper pectin. 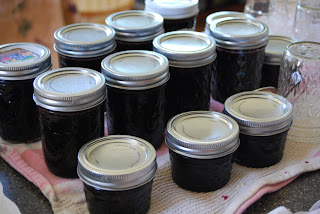 I'll be shipping this lot out to some lucky people out there. Although you will need to wait until I get my other round of jam making complete as several of my people requested a sampling of my jam adventures. And what are those adventures you ask? Well, there's that standard peach I make EVERY year because that stuff is so darn good that you crave it nightly after the first bite. Then there will be the return of the Plumeach jam equally addictive in it's own sinister way. I think I crave that jam more than any I have ever craved in my entire life. The next new one is actually not a jam at all, rather a jelly, lavender jelly. I'm going to give this a try since I was so fond of that lavender lemonade last summer. Besides if Queen Elizabeth I couldn't live without lavender jelly then that must be some good jelly. If I can fit in more jam making into my summer I'd like to venture into pepper jams. I have a decent pepper patch in the garden that will provide the stock I need to give that a try. The jamalicious summer is off to a good start.
Email Post
Labels: In the Kitchen Recipes