After a week away the garden took a turn for the crazy. Most of our veg did fine without my daily touch. The grape tomato is the worst of the bunch. It's holding on barely, it could be touch or go with that powerhouse. I hate to see that 'lil guy fold up for the season since the girls prefer to nibble on the tiny tomatoes. I'll see what I can do to help motivate 'em to hang on for us. The other two tomatoes are doing well. I had several ripe tomatoes ready for picking. Unfortunately I had to toss 4 into the woods. FOUR! What a sad thing to see is a tomato being devoured by eager bugs. They won't get a chance to take any more now that I'm back to keep those pests away. 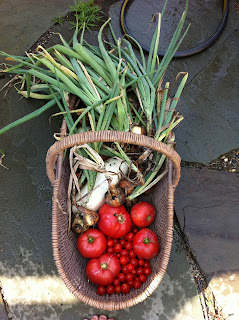 This is the bounty I collected this morning. Quite a feast of tomatoes! There are 3 large white cucumbers and several Reisen onions. I have some bell pepper and jalapenos tucked under all those onions. It looks like we're having a batch of pico de gallo this week. 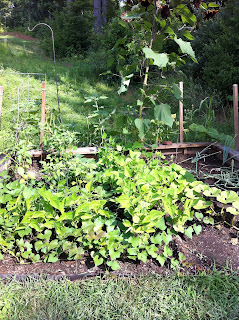 I'm learning much about the gardening. For example sweet potatoes are viney. I never knew that about them. They have taken over a good portion of the garden. It's good and bad. Good for the green beans because they need the protection but bad because it makes getting around difficult. Also tomatillos are crazy. They grow very wacky. Tomatillos take up as much room as they can get really bushing out, almost horizontally. I caged up a few but they seem to prefer creeping along the ground. So long as they produce fruit it's all good. The bonus with them is not many bugs find them interesting. I am liking them a whole lot. 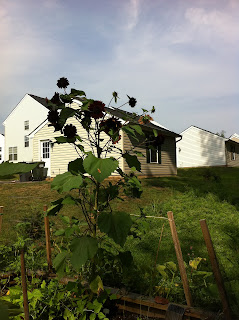 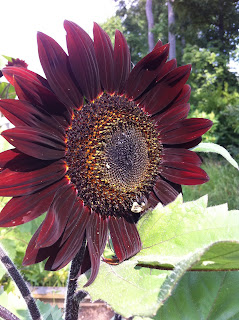 The heirloom sunflowers are looking good. I just love this dark red color. The bees have been so excited to visit. These flowers are a big deal in the garden attracting all sorts of bugs. In the morning it is quite the happening place. 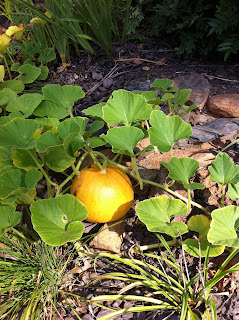 When we left our pumpkins were just little balls but now boy have they grown. These are the Big Max variety. They are supposed to get super large. I just want ONE to make it to fall so that we can make a jack-o-lantern from it. So far so good. This year has turned out to be the best year ever for our pumpkins. Every year we lose them to vine borers and stink bugs. Although those stink bugs are going to be here soon so I could be telling a different story next month. 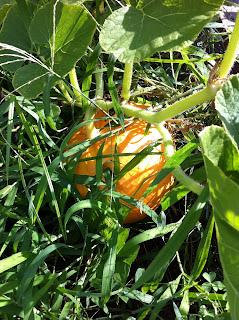 This year I tried a new cucumber, a white one. It has been fun to see them so pale poking out from under the vines but for some reason they only get really FAT. I've been watching a couple now for a few days. They are starting out normal but there just seems to be a point at which they go from a standard cucumber shape to FAT. So strange. I think they will not make a return next year. I'm thinking next year some Israeli cucumbers. I find the smaller size makes a better portion for my needs 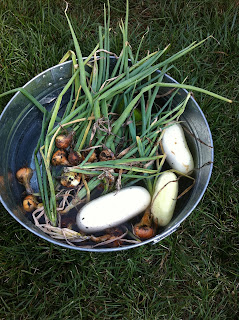 I had the girls wash our veg in the washtub before giving them a good scrub down. They cut off the onion tops and picked off the skins. For them it was fun to splash in the tub. I'll be doing this most certainly once those crazy sweet potatoes are ready.
Email Post
Labels: Garden