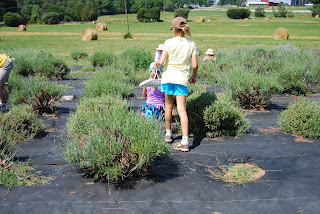 On Friday we girls went to a small local lavender farm to pick. The girls were the pickers gathering up a small number of stems to take home with us. Adelynn took her usual spot in the wagon and worked on chewing things. Olivia was all about getting the best lavender. She pointed out several times that the lavender wasn't the best. Even at 9 she knows what a good stem is supposed to look like, she is learning! I had to remind her that comparing our lavender to a farm's lavender is different. Ours was just as spent as the farm's lavender because the season is over. It blooms in early summer and if you're lucky maybe again in the fall. I told her not to worry about a pretty fresh stem. I just wanted the dried buds anyhow so she sought out the best looking spent stems. 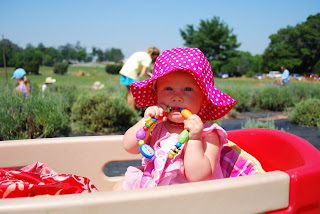 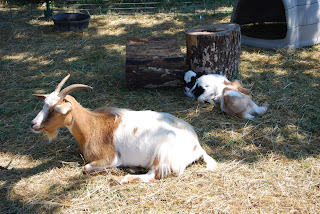 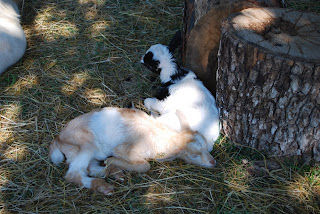 Leah was also helping pick but she had her eyes on another activity. Leah was so excited to meet the new baby goats. She didn't waste a moment to hop in their pen to snuggle with them. They were so sweet at just 5 weeks old they were the perfect size to pick up and pet. The Mama was pleased to get a break allowing all the kids a moment to visit with the humans. Olivia took time to explore the little play cottage with Adelynn. Nestled under a large oak tree is was the perfect place for kids to play and keep cool. 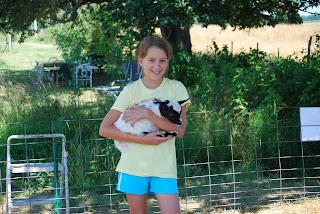 The morning started out cool but that heat kicked up once that sun got going. By 10am that humid air was building. After all that lavender picking we needed to take a moment to rest in the shade. A pitcher of lavender mint tea was available for quenching your thirst as well as a cooler of water. Because we gathered up our lavender so fast we really needed something else to do to pass the afternoon away. A quick stop in the small farm store we picked out a few things. I picked up some more culinary lavender. I'm nearly out of my supply at home. 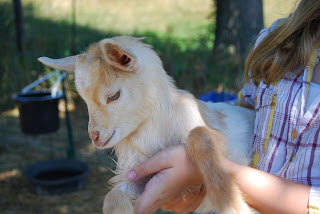 Once we finished looking around lunch time was approaching. That's when we agreed that perhaps lunch was in order. We decided to forgo the packed lunch and try out the Inn recommend by the farm. It was a great idea. Sure it was pretty fancy according to the girls but as we looked around the grand dining room almost everyone there was at the farm. While they picked at the plate of cheese and crackers they tried hard to find those varied cheeses and cured meats to be appealing. I was pleased with my choice of lavender honey basted salmon with couscous. It was fantastic! Thank goodness dessert was not a disappointment for the girls. They enjoyed lavender ice cream sandwiches resting in chocolate sauce. Judith and I enjoyed the lavender creme brulee. I had a great time exploring the culinary treats of lavender. It was so interesting to see the farm's lavender be used in several of the featured dishes on the menu. I for one was hoping for some lavender lemonade. It was available at the Inn but by the time we arrived it was all gone! Ahh what luck. That was okay, not that big of a deal. I'll just have to make my own this week. 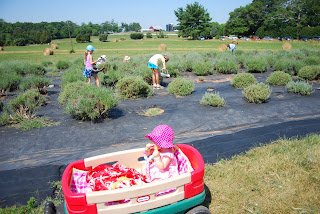