Making my own pasta has always been something I wanted to try. Fresh pasta. Sounds wonderful eh? I made fregula with my girls. Fregula is a pasta from Sardinia Italy. Fregula is little pasta pearls. It's an easy type of pasta to make. You do not need any special equipment. All you will need are: a bowl of water, some semolina flour, a baking sheet lined with parchment paper, well actually three of those, and 2 different mesh-sized strainers. Your strainers should have different mesh-sized holes in them to allow for a finer level of pasta sifting. Select a baking sheet from the three you prepared to be the fregula making station. Pour 2-3 cups of semolina on to the pan. Shake the pan to evenly distribute the flour. 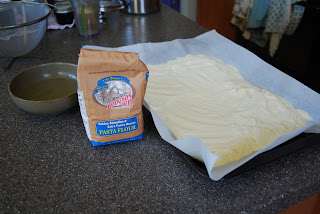 Once you have your area ready to go all you need are some hands. I have several pairs in this house to help me. You dip your fingers in the bowl of water and flick the water off your fingers forming droplets in the semolina. 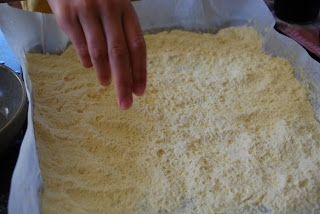 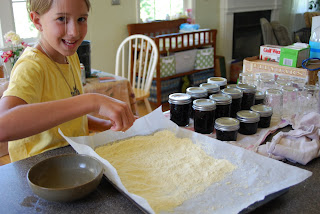 Leah really had fun working the pasta magic. She was the big droplet factory for our batch of fregula. 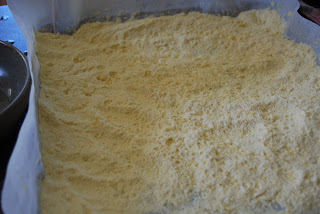 Here you can see the water droplets in the flour. We had all sorts of sizes of fregula. Some were so big from those oops moments of too much drippy fingers. Don't worry about that lumpy clumpy bits. We just set those bigger portions aside and pinched off smaller sized bits once we were done. 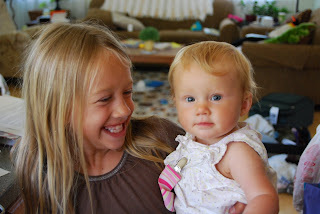 Olivia had the important job of keeping Adelynn busy as Leah and I finished the pasta. 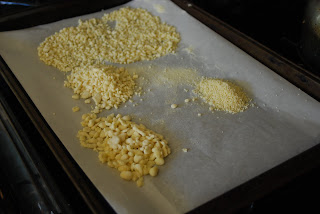 By using the different mesh strainers you are sifting out the varied sizes of pasta. You will end up with larger fregula toward the left corner and finest fregula middle right of the picture. The fregula on the back of the sheet is the size that you want for the supper recipe. Really, using it all, save the finer fregula for soups, is not a problem. Once you have completed the fregula making it is time to toast the pasta. This is where separating the sizes is important. Heat your oven to 325 and place your large, medium and small fregula on three different baking sheets. Bake the small to medium sizes about 10 minutes. You will want to check on them after 5 minutes and give the pan a shake to help evenly toast them. The larger fregula will take about 20 minutes. Allow them to cool and you can store them in a glass jar or in a sealed bag in the freezer. I put my smallest fregula in the freezer for later. I went ahead and made supper with the remaining fregula. You boil fregula as you would dried pasta in water for about 8 minutes.

I made a pretty typical summer pasta sauce to go with this fregula.I chopped an onion and sauteed it with about 3 ounces of chopped bacon. Once the onion was soft and the bacon cooked I added half a cup of water. I added some salt, pepper and a dried bay leaf. I gave the mixture a good stir and added a pint of cherry tomatoes. I turned the heat down covered my pan and let the sauce cook until the tomatoes popped. At this point I began to cook the fregula. By the time the fregula was done my sauce was ready. About 10 minutes. I drained my fregula, turned off the heat for the sauce and combined the two together. I sprinkled a mixture of grated Parmesan cheese and fine bread crumbs seasoned with Italian seasoning over the top of the pasta. I placed the entire pan in the 400 degree oven (uncovered) to bake 20 minutes. Allow the pasta to cool before serving.

If you would like to make this dish but do not have the time to make fregula substitute Israeli couscous. For as much as I'd love to make this EVERY week there is no way I can do that with a busy house like ours. One day I'd like to get a pasta press for my mixer so that I can really go pasta crazy.  Until then we'll stick to the every once in a while fregula making.The girls were so excited to try supper that they could hardly wait to eat. They were also so proud of their hard work which contributed to such a delicious meal.
Email Post
Labels: In the Kitchen Recipes