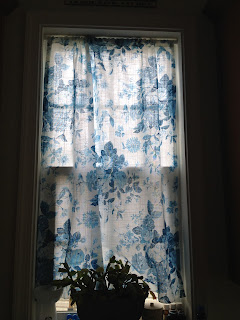 This little window above my kitchen sink has been bare for 5 years. Wow. I can't believe it has been that long. That's a long time to have one little window left bare. I guess I never really put too much effort into finding a window covering for this one. Which is odd since I've been quite irritated with being blinded by the late afternoon sun. Last weekend I decided after numerous nights of being blinded from working on after supper dishes that it was time to cover that window. Squinting while washing up is really as awful as it sounds. Surprisingly it took 5 years to motivate me into action.

Why did I wait so long? Part of my delay has been a result of me seeking that perfect curtain. Oh the perfectionist in me is strong. Almost to a point of ridiculousness as in standing night after night for five years squinting while doing dishes. Since I've had 5 years of nightly squinting to envision that perfect image you'd think that I would know by now. Nothing came to mind. Nothing seemed a good fit. Instead of fretting over the style, the look, the color, the material, the EVERYTHING, I just did something about that window. I had enough of that sun blinding us in the afternoon making the kitchen hot and uninviting.

I went to the basement in search of the fabric for some simple new curtains. I sorted through my fabric stash discovering several tidbits from the 1980s. Oh my. What were we thinking?! After many bouts of laughter and some seriously awesome finds I had narrowed down my choices. I laid out three options. One a nice simple light blue gingham that screams farmhouse window, another simple off white plain cotton and the last a medium weight linen with a lovely floral print. As you can see you know what I chose. Whereas the others were delightful this linen sold me with its nice print just the thing to add some fun to that window. Also it had another attribute: this fabric required zero cutting! It just happened to be the correct dimensions I needed to sew. How's that for a happy happy sew sew project? Perfect I tell you. Some pressing here a little bit of sewing there and it was all done in under an hour.

The finished curtain fit perfectly in my window. It has made such a difference in the control of that powerful afternoon sun. Now my only problem is I can't put off doing the dishes because of the sun. Hmmm, maybe that's why it took 5 years to decide!
Email Post
Labels: Craft-a-Go-Go In the Kitchen Sewing