We landed in Paris 10:30am Saturday local time. We were eager to be on our way to explore the city. Despite being utterly exhausted we managed to find the energy to walk all over catching as many sights as possible. To make it even more challenging we had to carry our luggage. We had the foresight to pack everything into backpacks knowing that we'd be exploring the far end of the city before checking in to our hotel. Good idea but very exhausting. Keith had to race to the Paris Pass office to collect our Pari Passes. Once we got to the Metro stop he dumped the luggage with me and disappeared. I was so turned around and my brain was struggling to remember what street he told me was heading toward. The exits were plentiful which made choosing one game show like stressful. I took the easiest one I could find because carrying around 80 pounds of luggage was going to slow me down significantly. I stepped out of the Metro looking for a place to rest and wait. There was no way I'd be able to drag our belongings after Keith. He'd have to just find me later. I walked down the street until I found a park. Perfect place to sit and wait safely. There I wouldn't be bothered by random people trying to sell me something or ask for directions. A very chic Frenchwoman approached me seeking directions to a cafe. I had no idea where it was and stumbled my way in French to tell her. Eventually Keith walked by the park. I screamed like a nutcase to get his attention. Since he left his phone with me I was having a worrisome hour waiting for him to happen by. Really his ability to find me had to do with him knowing me so very well. He assumed I came out on the wrong side of the Metro and would be so lost. Thank goodness for being predictable. With passes in hand we were ready to explore....only after some lunch. We were famished. We walked toward the Metro line we needed until we found a decent looking cafe. We wanted a nice outside set up where we could stuff all of our bags under the table. Keith found a great place. Even better was that the waiter spoke English. We needed that help. I was far too tired to get my brain to work around translations. 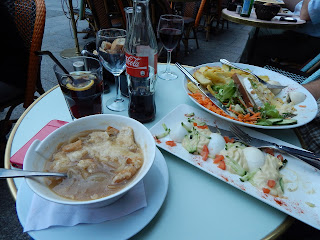 Keith ordered a huge salad. I went with onion soup and what I thought was a small plate of hard boiled eggs and mayo but ended up being a whole lunch itself. Everything was amazing. We did encounter a small translation problem when Keith ordered wine. What Keith ordered and what the waiter heard were two very different amounts of wine. The waiter heard half a bottle. Never one to waste good wine Keith heartily drank it up and I envied him for being able to enjoy that French wine. After lunch we continued our walk to the Metro. Keith took pictures the whole day. 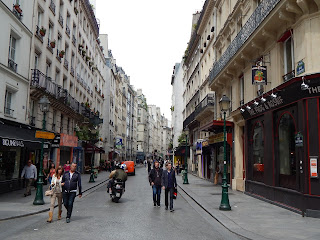 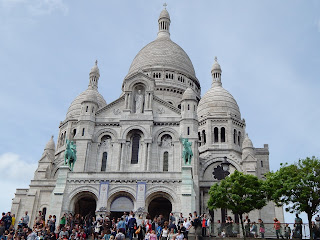 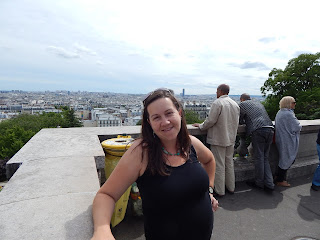 Both of us wanted to see the Bascilica of the Sacred Heart. While we rested at the fountain just below the Bascilica countless men approached us and me of all people trying to sell us bottles of beer. Clearly drinking during pregnancy is not a big deal in Paris. Maybe they thought I needed a beer! After hiking up that hill most everyone wants a beer. 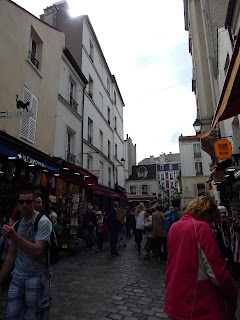 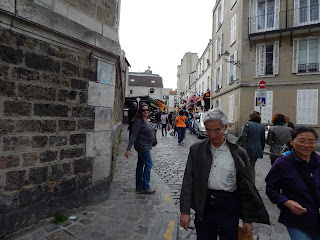 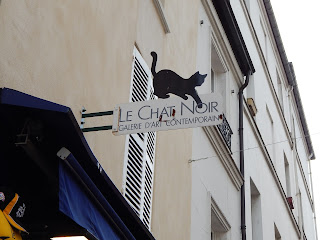 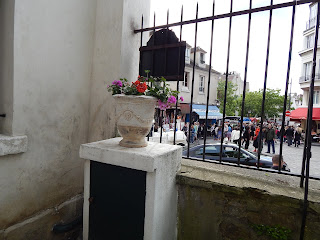 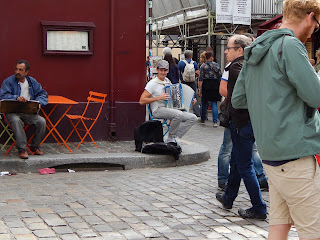 We spent most of the day exploring the area surrounding Montmarte. It's a very tourist heavy area. Plenty of shops selling everything a tourist could want. There were even musicians performing on corners. This guy was playing rock songs on his accordion. He was tremendously talented. 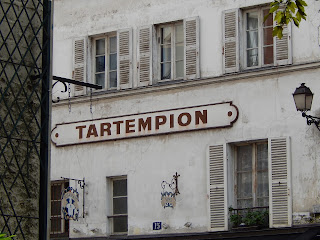 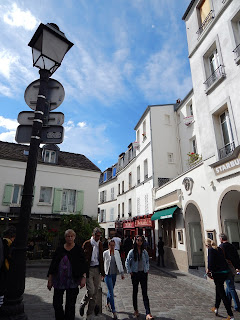 By evening we were ready to check in to our hotel. Hours of carrying around luggage was making us grumpy, or at least I was getting very grumpy. I needed a nap. 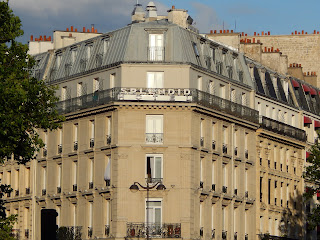 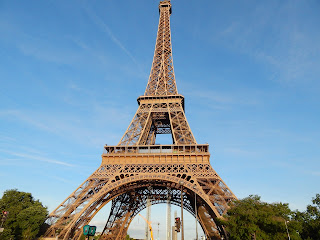 We were able to see the Eiffel Tower from our hotel. That was amazing. Taking in the sight reminded us we still had hours of sunlight to explore. We cleaned up rested and then stepped out to see the tower in person. With our luggage in the hotel walking was so pleasant. Our plan to go up in the tower was crushed by the length of the lines. Hours until you could get to the top. We agreed that trying tomorrow might be better. By dusk we sought another cafe for a late supper. Another excellent cafe with a prime location caught our eye. A full meal eating outside in beautiful weather made for a perfect ending to a long day.