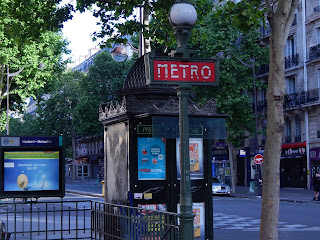 We woke early to make it to 8am mass at the Notre Dame cathedral. An eerie feeling of silence at those early hours really makes you wonder about the city. Whereas America in big cities people are out early in Europe that is not the case. For the early riser you get to experience a quiet peaceful time. We arrived earlier than anticipated so we passed the time taking pictures of the cathedral. 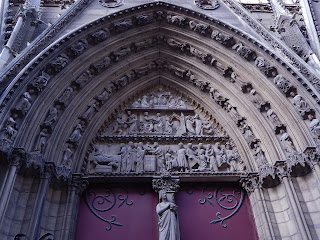 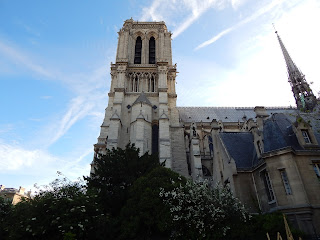 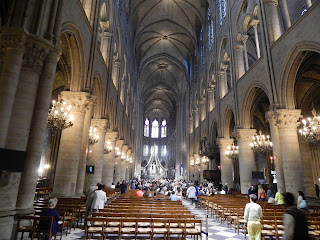 It is so very strange to be attending mass while tourists take your picture. I can see how the holiness of the Mass can be removed when there is a constant stream of tourists filing through the cathedral. After mass we spent the next hour exploring the cathedral. There was so much to see. So much spectacular artwork, carvings, altars, everything. Beautiful. I found it difficult to take it all in so quickly. You can find a profound deep love for these saints that have been so lovingly painted or carved. The artists were so devoted to making beautiful pieces. 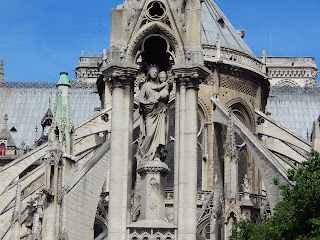 Despite our need for more sleep we learned it was advantageous to get to the cathedral early. This we affirmed once we stepped outside. When we went inside the area surrounding the cathedral was empty and spacious. The silence was peaceful. A few people like us heading to mass but mostly city workers were busy cleaning the streets. Afterward it seemed like thousands of people were filling the square. The line of tourists waiting to get inside was never ending. Tour groups were clustered all over waiting to move to the next big sight. It was overwhelming. Since we skipped breakfast we stepped over to the cafe across the street from the cathedral. There we watched as more people arrived queuing up to get inside. Our table was facing the line to the tower. It stretched down the block. We had interest in going up to the tower too but I was in no shape to climb more than 20 steps in a row. 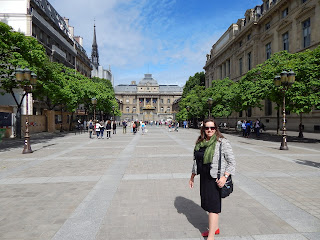 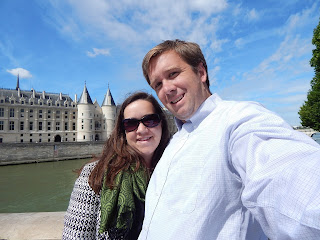 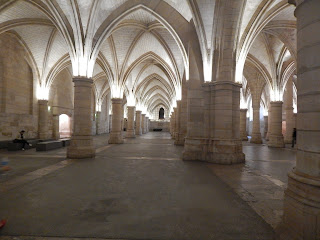 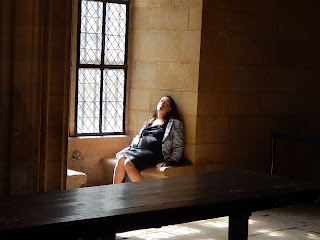 I took a brief nap while Keith took pictures. The day had just gotten under way and I was exhausted. Excitement about the day kept me going. 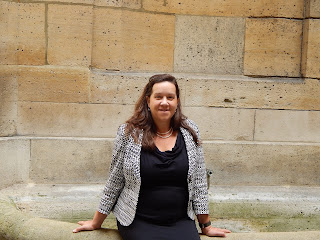 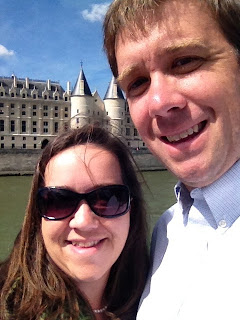 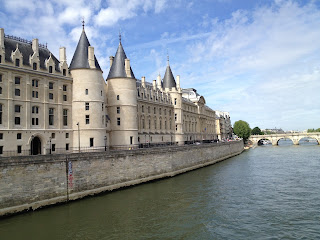 We finished looking around the palace and felt it was too perfect of a day not to visit Versailles. A long train ride later we were there. Another busy location with long lines. This time it was mostly a security check that was slowing the process down. Keith and I took turns waiting in the 90 minute line. Once inside we were able to explore relatively freely. The palace is enormous. The rooms are so beautiful. 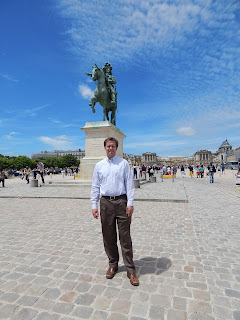 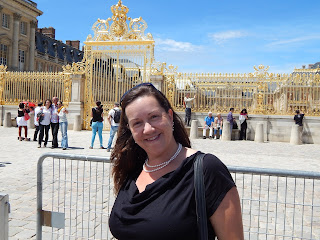 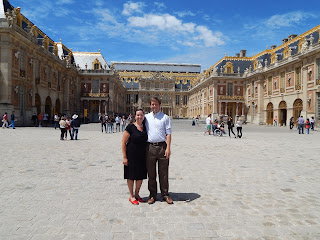 Versailles was amazing. I needed to rush through certain rooms. They were so stuffy and over crowded that my pregnancy super sense of smell was making it far too difficult for me to keep my nausea under control. After a while Keith knew to find me beside an open window. When we had seen the important portions of the palace we had planned on taking a stroll in the gardens. That sounded so romantic last night but after being on our feet for 8 hours already we were not interested in strolling. We still had so much more to see on our list that we needed to move on to the next location. 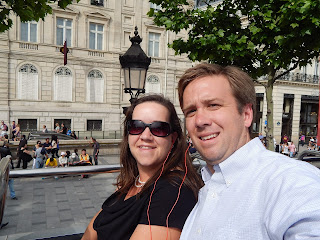 Completely worn out from seeing so much we had to find another way of getting around Paris. The tour bus was our saving grace. An hour of riding the bus was what we needed to recover. On the bus it was possible to see the dozen other sights we had on our list for the day. 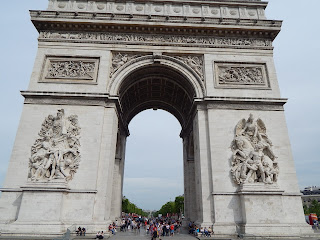 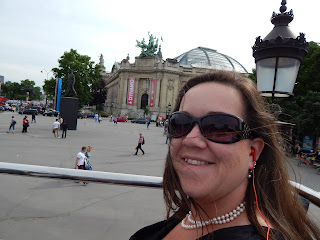 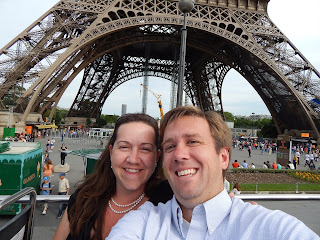 At the Eiffel Tower we stepped off to check out the lines. Still long. Days and days long it seemed. We passed on going up once more. Next stop was to feed this pregnant lady. We had not eaten a decent meal since breakfast. Our ice cream cones after Versailles was no longer keeping my hunger under control. A stroll through the Eiffel Tower park led us to many dead ends. Summer is the time of construction. There were so many exits blocked off due to massive changes being made that we ended up having to walk all over trying to find a way out of the maze of construction. 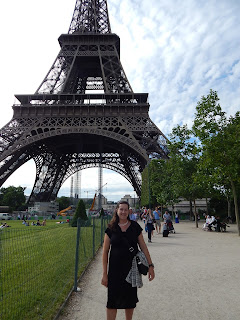 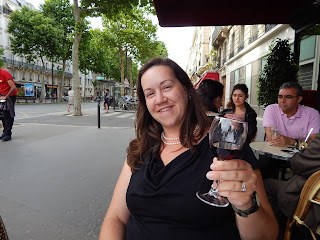 Our early dinner at another amazing cafe. While everyone else was having cocktails and snacks we were going for a decent meal. I decided to look more French and have a glass of wine next to me. Keith was very helpful in making look like I drank my wine. By tonight it became very clear to us that we were not going to get to the top of the Eiffel Tower unless we were willing to wait 2-3 hours in line. Since that was far too much time to devote to one sight Keith suggested we head back out of town to the Tour Montparnasse building. As tired as we were it was something we needed to do because we both wanted to see the city from up high. This was the only way we were going to accomplish it without wasting hours in line. 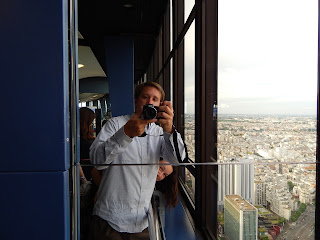 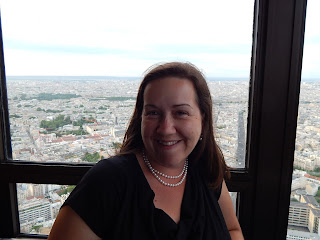 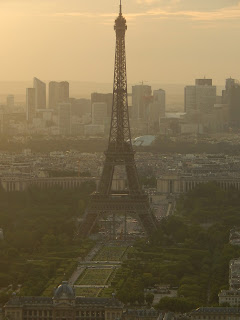 Seeing the city from the Montparnasse building was fantastic. At 60 floors high it had amazing views of the city. We were able to get every angle of sight. It was well worth the trip out there to get the view.  We finished our long day eager for rest. We have one more day of Paris to go. With hundreds of things yet to do we will have another long exciting day ahead.