Adelynn's pre-school has a wacky snack day once a month. On that day the school gets out early and instead of lunch the kids have a snack provided by a parent. I chose October's wacky snack because I knew once my baby arrives I'm not going to be able to do much more than just drop her off and pick her up from school. Choosing a snack to bring has been more difficult than expected. There are children will allergies in her class which makes selecting a snack tricky. In addition there are limitations as to the amount of sugar/fat/etc each snack can have per serving. When did snack time at school become so complicated? 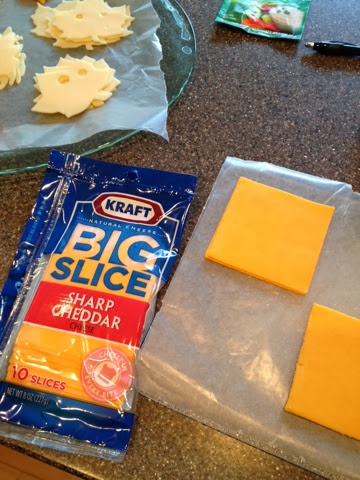 Looking for ideas only made me more irritated since several were not possible for one reason or another. I found the inspiration at the Canadian Family website for a fall tree snack. To save time I bought pre-sliced cheese. I started using the Kraft brand in the picture above but that was sliced thinner than I expected. Thankfully I had the foresight to buy a different brand when we were at the store. It turns out that the Target brand packaged sliced cheese is just the perfect thickness. 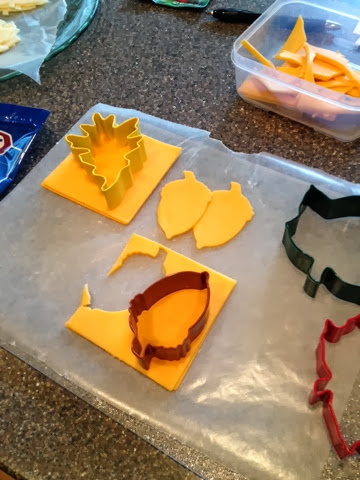 Rather than use a combination of cheese and bell peppers I opted to create our wacky snack just with cheese. I know many little ones are not fond of many vegetables so using bell pepper would certainly be a tough sell. I still wanted to incorporate some veg into this snack so I thought that maybe I could use some broccoli to make grass under the tree. I set to work cutting out the fall leaf shapes. I have so many cookie cutters around here all I needed to do was sort through my big tin to find the ones I wanted. 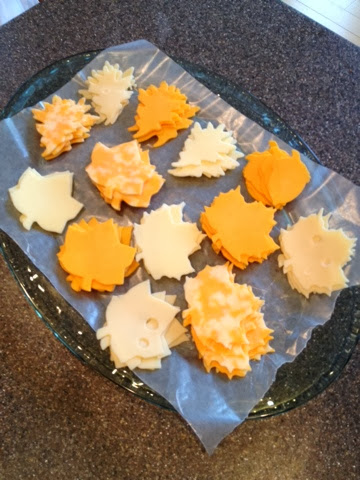 Once I cut all the leaf shapes out of the cheese slices I stacked them up on some waxed paper. I put them back in the fridge for a little bit to chill before I put the tree together. While the cheese was chilling I cut up the broccoli and cucumbers. 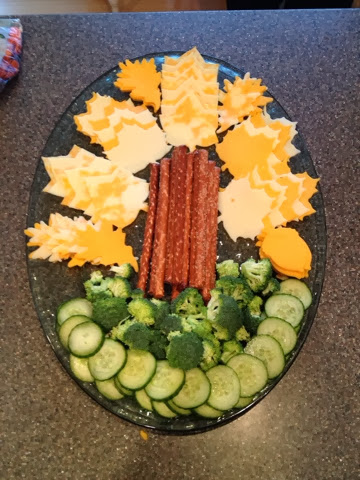 Assembly was easy. I decided to make a combination of cucumber slices and broccoli for the "grass" under the tree "trunk"of rod pretzels. The fun part was putting the leaf cheese slices around the tree trunk. After the platter was ready we took it to school. We served it with some veggie dip. It was a bit hit with the kids and so easy to make. I think it would be a fun tray for Thanksgiving.
Email Post
Labels: Children In the Kitchen School Projects