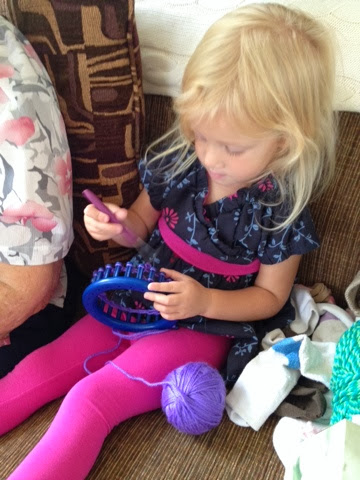 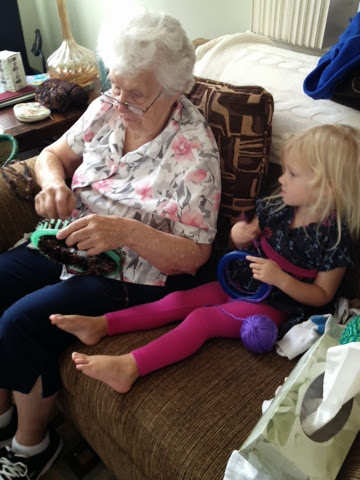 We've had the Grandmas in town this week. Great Grandma and Grandma have dropped by for a visit. Ever the crafty ladies they brought with them a suitcase of yarn and their looms to make hats. They have been making hats as a party favor for one of their social groups. 400 hats to be precise. Yes you read that correctly. 4 0 0. Four hundred hats. That's a lot of hats. They are at 300 something which means not many more to go but plenty to keep them busy. All week the Grandmas have been knitting.
With all that knitting going on there was a curious little girl asking plenty of questions about "what's that?" or "whatcha doin'?" or "what are you making?" all the busy work happening in the house. It didn't take long before all three of the grand-daughters were crafting with yarn too. Leah sought her knitting loom and basket of yarn from the basement. While she fiddled with the looms pondering what color yarn to use Adelynn found a loom her size to use. She too wanted to be a busy crafter. Leah had Grandma remind her how to use the loom again then she set to work. Adelynn sat next to Great Grandma eager for her lesson. First Adelynn began with pink yarn. Later she ended up with purple only to return to her pink. (She has the multiple project problem I have too!)
Great Grandma showed Adelynn how to loop her yarn over the loom. Using the phrase "up and over" it wasn't long before Adelynn was charging through her project. I was impressed with my three year old girl's focus. She sat still for 20 minutes working on her hat. She can't wind the yarn around the loom yet but she can loop the yarn perfectly. While Leah and Adelynn worked the looms Olivia found her interest with pom-pom making. She was so fascinated with creating various combinations. I dare say there may be a few dozen pom-poms lurking around this house.
Between the loom knitting and helping the girls I worked on my lavender In Threes cardigan and untangling yarn. Our "play" yarn bin was quite a mess so it needed a good sorting out. I had forgotten about how messy that yarn bin became last time they used it. Most of the yarn is leftovers from my projects or from friends looking to ditch their hated yarn. Never one to waste yarn I took what those friends gave allowing the girls to use the yarn as needed for what ever craft project they created. Doing so clearly came at a cost: me detangling skein after skein of yarn. With freshly wound balls of yarn at their fingertips the girls are well on their way to making more hats complete with pom-poms.
Email Post
Labels: Adelynn Craft-a-Go-Go Crafts Knitting