Not quite vintage baby cap 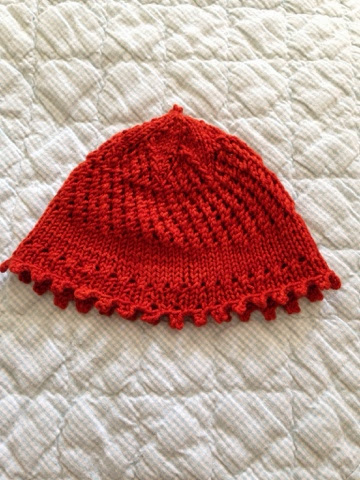 A blurry picture but a picture nonetheless. This was a spur of the moment knit. I found the book Knitting from the Center Out by Daniel Yuhas at the book store. Of course being thoroughly inspired by the countless projects inside the book I guess I became fixated on finding something quick to try. Knitting from the center out! Yes! Please I wanna try!
When I saw the baby hats I was instantly suckered in. The pattern was based on some vintage baby caps the author came across. He was so fascinated with the simple lace bonnet style hats common in the 18th century that he decided to come up with his own pattern. I'm so glad he did because these caps are so adorable. Having yet to knit something for this new baby the Medallion Caps looked like just the project to solve my two requirements: something from the new book and something for the new baby. I immediately set to work. Conveniently I had just the yarn laying around needing a small project to put it to use. The Ella Rae lace merino worsted in red-orange was a perfect fit for this pattern. I bought the yarn a few weeks ago while I was buying a gift for a friend. Actually Adelynn found it. She grabbed several skeins and once I held the yarn I knew it was coming home with me. I love fine merino. This was the perfect fall color for me to be inspired with at the time a baby project. So I guess the yarn ended up being used for the new baby's hand knit.
When I began the pattern I was skeptical. Never have I knit something from the center out. The pattern is based on using a 7 part pinwheel shape that gently turns into a textured lace. Just the level of challenge I desire in a small project. As each round progressed I was full of doubt. The hat just didn't seem to grow large enough. Despite my doubts I pressed on. I kept rationalizing that if in the end the hat was too small at the very least I needed to finish the pattern to see how it all works out. I'm glad I kept knitting. The hat did grow and finally became a size perfect for a baby. Maybe not for a newborn but this hat will certainly fit an infant through 12 months of age.
I followed the pattern up to the last few rows. Instead of knitting 8 rows for the band I stopped after the seventh round. After considering the pattern I decided to omit the sewing portion of the finishing. The band was knit longer so that the live stitched could be folded under and sewn into the turning round row. I didn’t want to fold the band under and sew the live stitches into the hat. To me it seemed like too much work and the end result would not be a comfortable baby hat. Babies are fickle when it comes to hats and comfort has to be a focus. Instead of sewing the band I opted to try a different finishing method. To replicate the picot-like edge from sewing the band I decided to use a picot bind off. Doing so gave a similar looking finish with a flat internal finish making it more baby friendly. A tad more feminine but very nice. If I make another cap I will reduce the rows of knits in the band to 4 rows and then use a simple bind off after the last reduction row which would be Round 11 of band. Overall this was a fun pattern and I'm totally hooked on knitting from the center out.
Email Post
Labels: Baby Craft-a-Go-Go Crafts Knitting