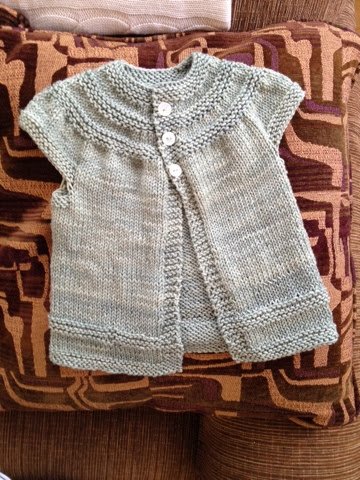 My first In Threes cardigan is complete. I cast on so long ago, well not really, but it seems like it was so long ago. June isn't that far back but I had anticipated completing the sweater by the end of July. I was about a month behind that goal. This sweater was finished the first week of September but I put off sewing on buttons until the end of September. I'm not a fan of sewing on buttons. I guess it may have to do with me thinking I'm going to sew them on crooked or lined up incorrectly. It's ridiculous, really, all this pressure I put on myself over silly buttons.
As it was another easy project to knit I assumed I would have the time and dedication to finish quickly. The pattern was easy to follow and using Madeline Tosh Vintage yarn made it a cinch to knit. Although that Madeline Tosh does have a way of growing your sweaters. The size I cast on was the 0-6 month range and this ended up fitting my 3 year old daughter. I was hoping that by using the smaller sized pattern and a slightly larger yarn this would work out to be a 12-18 month size. Oh well that's what I get for not knitting a gauge test. (Oh I loathe the gauge testing) I can't help my love for the Madeline Tosh yarn. It's such a durable yarn perfect for children's clothing that I can't resist pulling it out of my stash when a child's project comes up.
Since this cardigan came out a bit large for the intended recipient I cast on for another one. I resisted the MT yarn and chose a smaller more gauge appropriate yarn. It's coming along swiftly. I think this one will be done soon. I've promised my self the second In Threes has to be done before I start something else. Oh the hats I want to make. For once it's one project at a time.
Email Post
Labels: Adelynn Craft-a-Go-Go Crafts Knitting Wife