I began knitting this cowl nearly a year ago. The Honey Cowl pattern from Madeline Tosh is a free pattern. I decided to use the skein of my Madeline Tosh DK in smokestack gray. This super wash merino is such a warm yarn. A great choice for this project. The gray is not the most exciting color for a teen girl but then again it was initially a project intended for me. I love the gray color for its ease of coordination with multiple colors. I chose this pattern because I wanted something easy to knit while we were at indoor soccer training last January. Perfect for taking along, setting down, coming back to it later. All things I needed while keeping an eye on a two year old in a large area. The pattern is very forgiving with this yarn. I can see countless mistakes from my lack of noting where I was when I set the project aside. 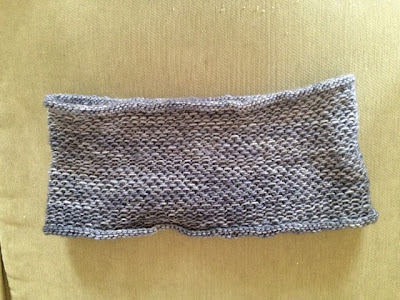 I assumed that due to the ease of the pattern it would be finished quickly. Then again who am I kidding. I charged through halfway then the weather warmed and this yarn was lost in my basket. I imagined this being a garment for me but it ended up being just the thing that the oldest girl needed on the cold morning walks to school. I decided to knit this about half as wide as the pattern suggested. Any thicker and the cowl would be too overwhelming for her to wear. I finished this just in time to wrap and put it under the tree for Christmas. My goal was to have a knitted gift for each gal under the tree, I made 2 out of 4, half my goal was reached. 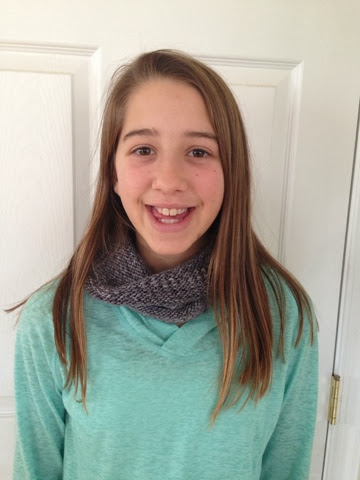 This was a fun project for a simple useful garment. I'd like to knit another with a smaller gauge yarn perhaps a little longer. Maybe a nice lace weight merino would made the cowl more of a 3 season garment rather than just for winter. We'll see what the next one will be but that one will for sure be mine. That is, if I don't swipe this one from my daughter.
Email Post
Labels: Christmas Craft-a-Go-Go Crafts Knitting Leah