What's a holiday without some frantic last minute knitted project? Way back in the summer I thought it would be so wonderful to have hand made gifts for the kids under the tree. Oh the dreamy plans I had. Then, well, life distracted me so that plan was forgotten. Until….I saw the Failynn Fox Cowl pattern. It's here: http://www.ravelry.com/patterns/library/failynn-fox-cowl if you want to look at it in more detail. On December 5th I decided this was the project to knit for my teenage daughter. So much for being a planner. I jumped right in happily knitting away. I had plenty of time! 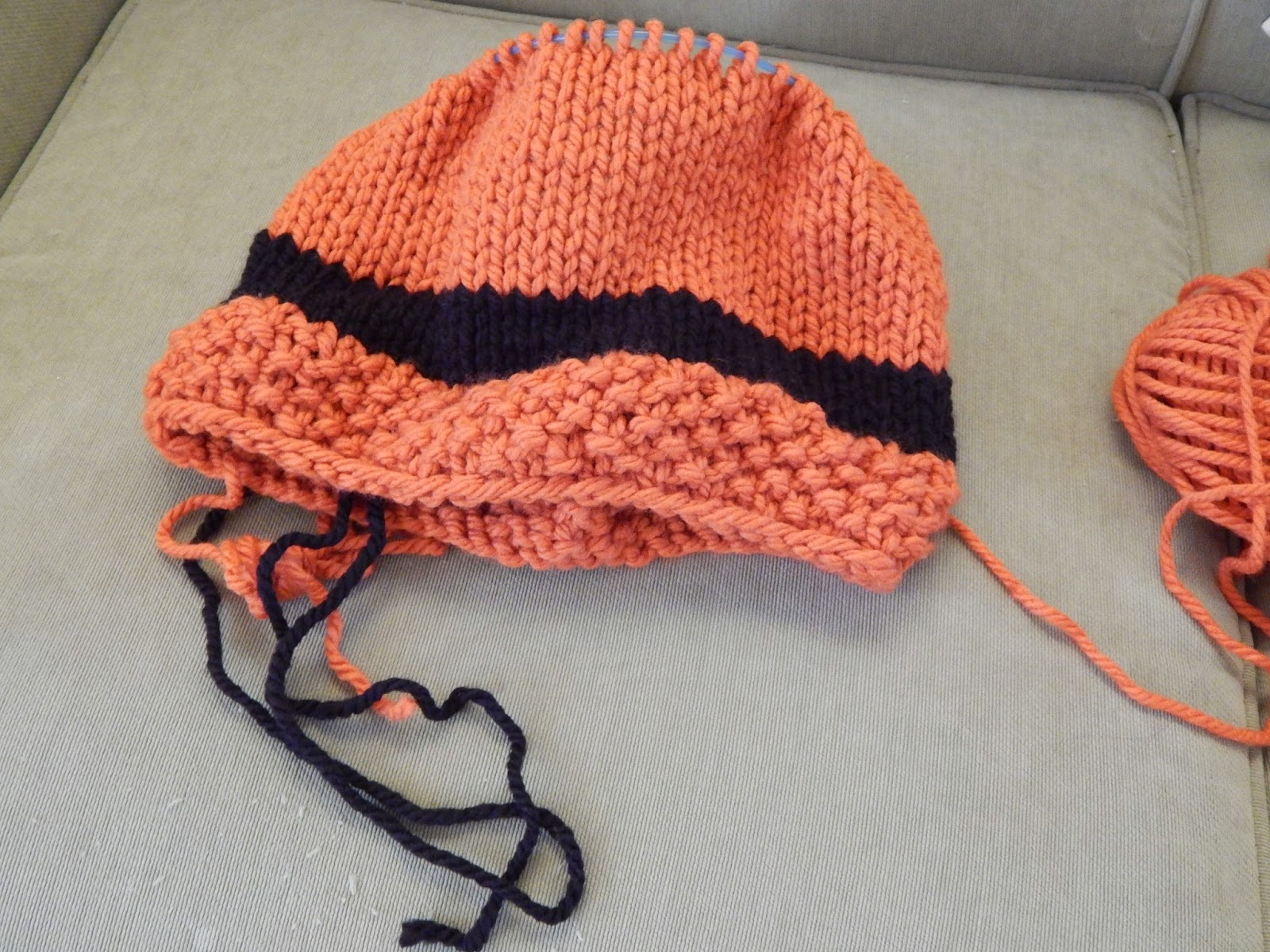 After about 5 days of knitting all I had done was a third of the project! Oh I anticipated it to be done by this point! So much was going on that each day I was lucky to get in a row. I began to worry that this project was going to go unfinished. Before panic set in I decided to promise myself some designated knitting time EVERY DAY! That also included me making it a point to the Mister that I needed 30 minutes a night until Christmas to get this top secret project done. Thank goodness the plan worked….not that there wasn't last minute finishing going on Christmas Eve, because there was plenty of that going on for sure, otherwise I'd have been pretty disappointed. I managed to get the cowl finished, wrapped, and under the tree before Christmas morning. Feats of strength I tell you. 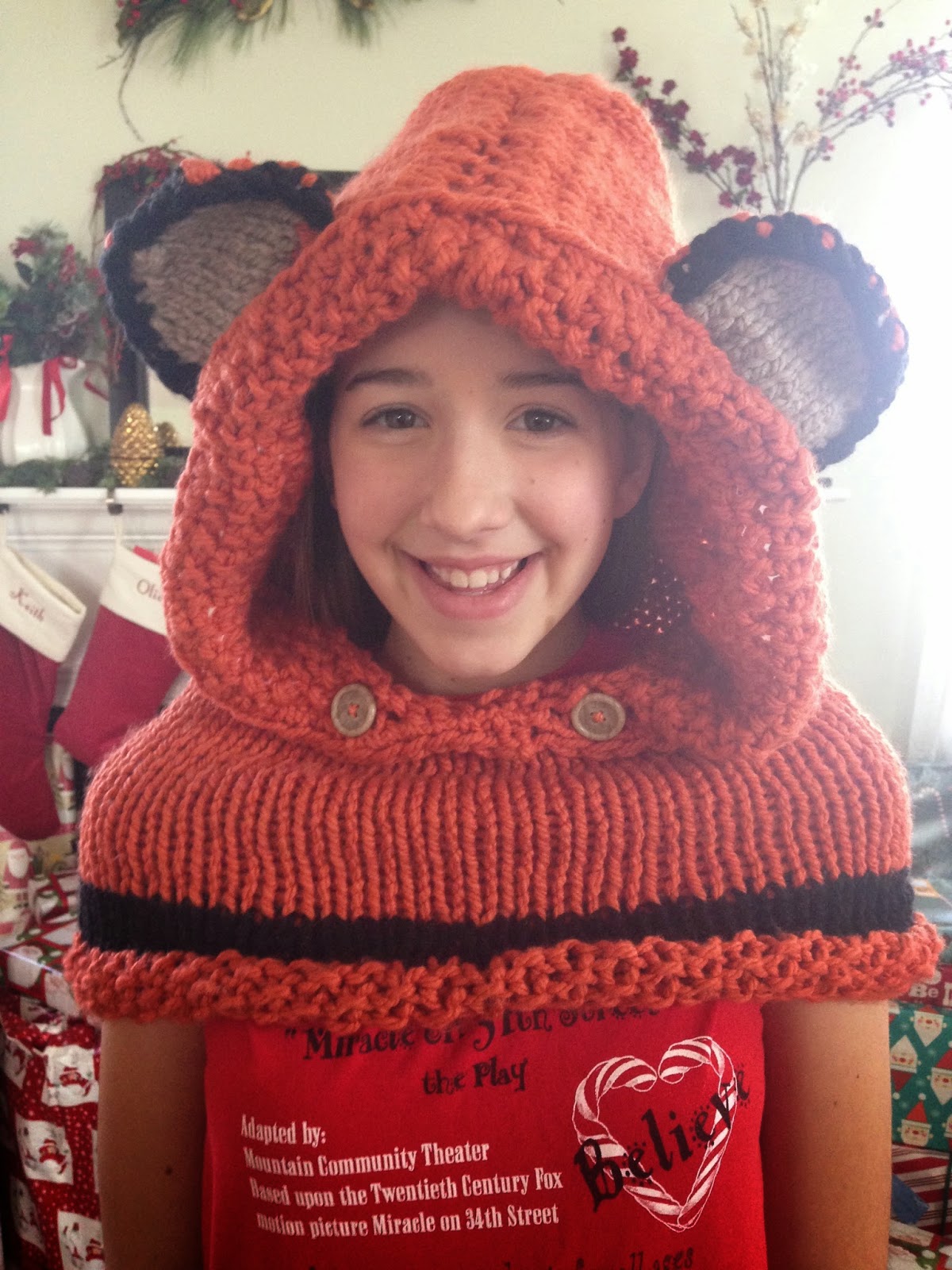 After seeing my dear Leah's excitement as she opened that present I knew all that sneaky work was worth the near panic I faced. She opened it up and ran around the room squealing with delight. It truly looks great on her. This was such a fun pattern to knit. It goes quickly but does require some time for finishing. Also if you, like me, have zip-o experience with crocheting then maybe you might want to check that out before choosing to make this on a deadline. I think if any panic was warranted it was as a result of my lack of crochet experience. The pattern requires a simple single crochet edge around the hood and ears. Nothing too extreme but certainly something that you will need to take time to learn how to do. Thank you internet videos!

To make this cowl I used Bernet Softee Chunky yarn in orange and black. I used Loops and Threads Charisma in a taupe for the inside of the ears. Funny story, I failed to get all the colors I needed for the project, ahem, the ears part, so I had to use what I could find at the local craft store December 23rd. I chose to sew buttons on that I decided were better to be working buttons as opposed to the pattern's suggestion of fixing them on to tack down the hood under the chin. I noticed as the day went on that the sides of the hood should be tacked down too especially if this cowl is for a kid or an active teenager. I like the look of the folded edge for a more finished appearance and I'm not sure why the pattern didn't suggest that to begin with. I will most certainly be making another one of these cowls they are a great gift for animal lovers. I have my eye on the Ryder Raccoon, so cute.