Tricycles are artifacts of childhood. I never had one as a child. I faintly recall a small longing for one. I was of the generation where small children typically had one in a garage along with a semi-rusty red wagon. The tricycle eventually made its way to our garage but not for me. My younger sister was gifted a beautiful red Radio Flyer tricycle. A sturdy red metal tricycle which was the standard model, nowadays they are made mostly of plastic. From the first day she was presented with it she was hardly separated from it. I remember how she would ride that tricycle all over the neighborhood. No matter the weather she was going to ride that tricycle. I also remember how fiercely fast she could pedal that red Radio Flyer. She could go so fast that she was quite capable of keeping up with me on my big kid bicycle. Me riding in the street and her on the sidewalk in that signature metal rattle and tire sidewalk crack bump noise. Sounds of childhoods summer right there. It was that magical connection she had to that tricycle that has always stuck in my mind. Hers was retired in a fully worn condition. Its paint was darkened with time, bits of paint missing from what can old be described as intense use. My sister reluctantly gave up her tricycle. By the time she moved on to a bicycle she was far too large for her tricycle. Her knees were well above the handlebars yet she would still ride it in that awkward elegance only a determined child could do. I don't remember what happened to that tricycle. Though it was used heartily and very much beat up the tricycle was still in a useable condition to be passed on to another child. That is what I think happened. Perhaps a younger cousin became the new child to pedal away in bliss. 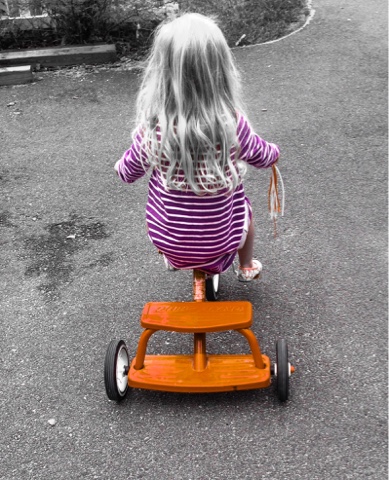 When Adelynn was small we brought home a tricycle. The plastic kind. It was a great design for parents with a handle coming from the back step plate. The handle allowed the tricycle to be used in a stroller like fashion. This feature is fantastic for small children unable to pedal or pedal for long distances. The plastic design makes it lightweight and easy to take anywhere. The plastic also takes away from the soul of the tricycle. You can imagine our delight when our dear friends offered their son's beloved red trike. A fantastic sturdy metal RadioFlyer! Adelynn was so thrilled. She hopped on and it was love. It took her a little practice to figure out how to get that sturdy trike going but once she did it was glorious.  She was hardly able to go far. Her journeys only remained within our driveway. Most of her trips were with the big sisters pushing from behind. 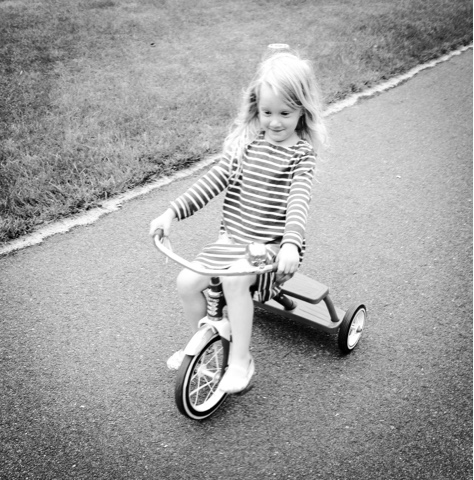 Once she mastered her trike she'd dash outside to go for a ride. Any sunny day beckons her and that signature metal rattle and sidewalk crack bump noise can be heard. I adore watching her speed around the street on her little adventures. Although the tricycle was about as perfect as it could be we had to add some things. There was a pink ribbon at one time. It often gets reattached and removed. I suppose when you are four years old you never know what you'll need ribbon for in your day. The most important new feature the trike required was a basket. I tied a small very damaged basket to the handlebars. The basket is for her toy cat, Penelope. The cat just wouldn't stay on the step plate and would end up being run over. It was pretty upsetting for Adelynn. So the basket went on. And off. And then back on. It falls off frequently. I think we'll need to get a decent bike basket for her. Girls do like to take things along with them during the day. I have enjoyed watching the new tradition of tricycle love. It is so very strong that even little Jane has been sneaking a turn on that Big Red. Jane can't quite reach the pedals fully but she can get that trike going a good revolution. It won't be long until she'll want her time with the tricycle. That is, of course, if we can convince Adelynn to part with her dear Big Red.
Email Post
Labels: Adelynn Children Daily life Play