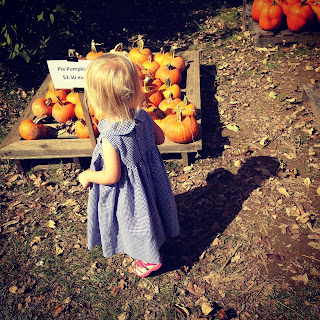 The littles helped me pick out some pumpkins at the farm. Today is our CSA pick up day and those pallets of pumpkins have been looking great. Of course the girls wanted the smallest pumpkins you could find. Both wanted to have armfuls of the tiny gourds. Our negotiating ended with them getting two each and Mama getting the pie pumpkins we needed. 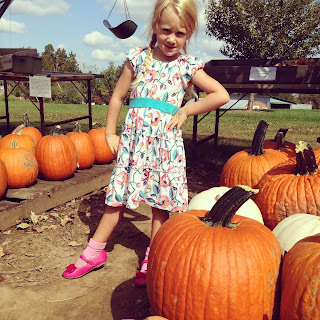 Usually we select four big pumpkins for carving our jack-o-lanterns. This year we won't be around to trick or treat so the big pumpkins will have to remain here at the farm. Although I did pause a moment and decided that maybe just one large pumpkin would be nice to have on the porch. If we have time we can carve it out. We'll see. I think the squirrels will end up with it before I can get to carving. 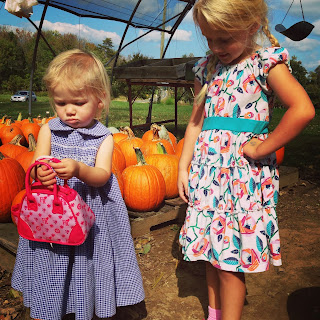 The girls were still trying to convince me that they needed more of those small pumpkins. Adelynn kept asking Jane if she had any money in that pink purse. Those two are a duo of silly. With pumpkins in our hands we packed everything up into the van and headed home. We've had such great weather this Fall that we ended up spending the rest of the afternoon playing outside. That in turn led to the decision for a last minute sort of supper of macaroni and cheese. Lofty ideas for using our box of veggies were put aside. Sometimes that sunshine just needs to be enjoyed.
Email Post
Labels: fall Farm My girls