Seasonally I change the decor in my home. At first it was a way to make the house feel more like a home because we moved from a home half the size of this one the vastness was too much for me. We rocked the minimalist style like pros. The came boredom. Seeing the same style of decor  up all the time made the house feel stagnant. It's something many people would not find bothersome. For me it began to drive me mad. Loony. Either I needed to redecorate or I was going to go mental. The easiest way to make an old place new is to move something around. My husband is a huge fan of moving furniture around. At first that seemed loony but it was his eagerness to change it up that inspired me to seek some change in the rest of our decorating. So there it was a new tradition of shaking it up. 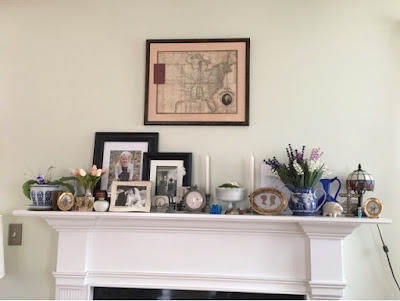 Usually by February I put out some Valentine themed items then transition in to St. Patrick's day. This year I broke from my typical and wanted to go with something different. My parents gave the Mister a 19th century map of the United States. It's such a great piece that I've been trying to think of a place to hang it up. We have very little wall space so finding a spot is tricky. I began with the 1832 map and went from there to fill in the mantel. 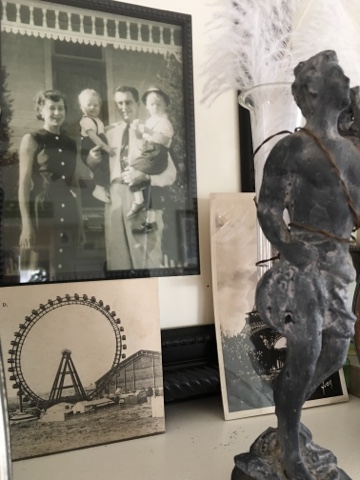 I used a mixture of things I typically use during this time of year and added some more to round it out. Often the black and white picture of my grandparents and the big picture of Adelynn are featured in the fall. This time they came out early. The vintage post cards of a Paris ferris wheel and the Eiffel tower were found in an antique market in Ohio. The Cupid statue I found at the garden canter. I'm not sure if it's a Cupid but that's what I think it reminds me of so that has become the name for this piece. It's quirky and was calling me out as I passed it on a display table. I do like unusual pieces. I think it's supposed to be a rain gauge but I found a great spot for it on my mantel. 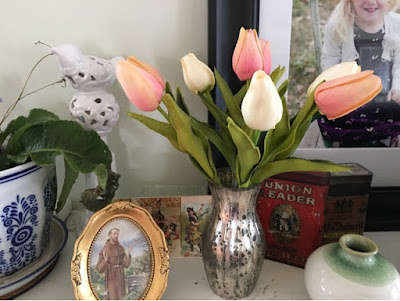 I will put out my silk tulips in the mercury glass vase and the framed pictures of saints. Lent being a time of prayer makes seeing the saints a top choice for me. I was given a very lovely plant but the pot was not so appealing. I went to the garden center to find a new one. It was difficult to find what I wanted. I was thinking that I needed to choose a white and blue pot to go along with my porcelain pitcher. I love that pitcher and adore seeing it every spring. I found a close enough design that would be complementary to the pitcher. So far repotting that plant has not improved its state. It has been a difficult plant to make happy. I daresay it may very well die before the season ends. I am not sure what type of plant it is besides difficult. Behind the mercury vase I have two vintage tobacco tins. Another find at an Ohio antique market. The vintage post card of Spain was a sweet find. I love old post cards and often find some great examples of art. 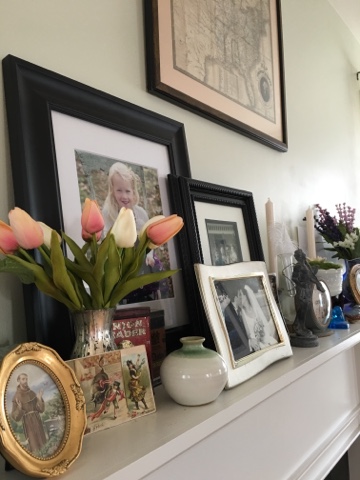 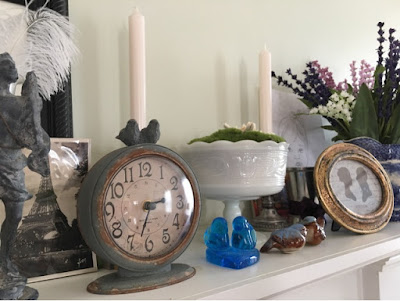 Clocks are another weakness. I found this one at the garden center last year. It has been moving around the house usually landing here once or twice. My ceramic bird collection is small but constant. The glass bluebirds were a wedding gift and they will always be set out for our anniversary. This time I got them out early to enjoy longer. I found the milk glass pedestal bowl at a local thrift store. Once I saw it I knew that it was just the item to use to put moss inside. I've had this piece several years. It makes an appearance all over the house in the spring. The frame with silhouettes was found at the garden center years ago. I meant to fill it with actual silhouettes instead of the ones the frame came with but time has gotten away from me. The candlesticks are being held with my grandmother's silver candlestick holders. Behind the silhouettes is a drawing of Adelynn when she was 2 year olds. It was drawn by a girl from church who was spending time in the nursery. It's a sweet picture and one day will get its own frame. I left it there to remind me to get serious about finding a frame but as you can see that was not enough to motivate me in to action. There is a little glimpse of the favorite pitcher. I fill sit with silk flowers and mixture of lavender and lily of the valley. I like the look of flowers fresh from the garden but without the worry of wilt. 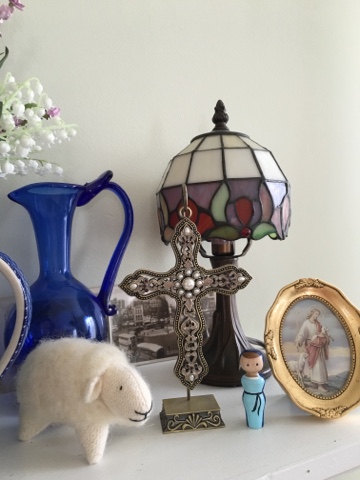 At the very end are some tidbits. The blue glass pitcher came from Williamsburg glassblower. I have never used it for anything other than decorating. It hold very little so its practicality is limited to being beautiful. The cross was a gift from a student years ago. I bring this out every Easter season because it's just so pretty. I found that Tiffany lamp at a home store years ago. It was a great bargain and I can't tell you how much I love that little lamp. I have it tucked away upstairs and it never gets used so I was glad to give it some attention. The hand made sheep is a toy the girls play with infrequently. I decided to add it for the Agnus Dei or "Lamb of God" reminder for Lent. And that leads on to the painting of Jesus and my sweet little peg doll I painted of the Blessed Mother. The vintage post card is of Piccadilly Circus in London. Again it was found at the antique market in Ohio. These were all the items that made it to the design. While putting this all together my intention was to create a design that would last though the summer. I think that I'm not going to have much time to get my typical beach themed mantel set up before summer starts.
Email Post
Labels: corners of my home