The littles have been out of preschool for a few weeks. In this time they have become stir crazy. I have been wanting to do some sort of activity with them to keep the girls occupied. Adelynn has been asking me about making a fairy garden for months. Her school has beautiful gardens which are incredibly inspiring. In addition her class frequents these gardens so the creation of her very own space has been on her mind for weeks. Originally I wanted to carve out a little space in our garden for this fairy village Adelynn tells me about every day. We have a great location near the playhouse under the cherry trees that would be the most perfect spot to create a magical little fairyland. But......we have a massive ant problem. Ants are in every space of our gardens. The same sugar ants that cause extreme panic in my littles because ants are bugs and bugs will kill you. Not wanting the little girls go berserk every time they play in a fairy garden I needed an alternative. Container gardens was the solution. The next issue was lack of a proper fairy house. Being frugal I was unwilling to spend $20 for a fairy house, or really any money, because the reality is that the little house will end up cast aside and forgotten about in a week. Instead I sought some items from the recycling to use as a fairy house structure. 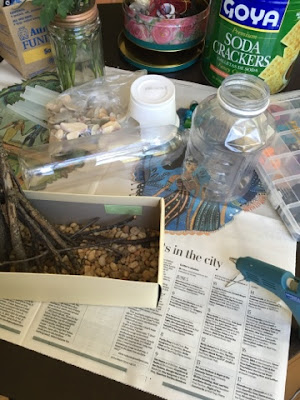 I washed out several plastic containers. I decided on the applesauce jar. It was made of a sturdy plastic, had a great stable base, and was just the right size and shape for a cute fairy cottage. I collected some bits from the yard in a shoebox then set up the hot glue gun, because I'm lazy and want instant gratification. In hindsight hot glue is no friend of plastic but this applesauce jar stood up to the challenge. That poor water bottle which will one day be a great stone tower is going to need some plaster and lots of gravel to complete. I've got all summer so that should be fine, right? 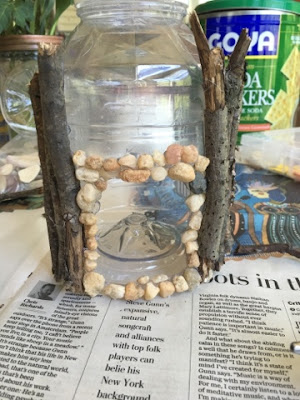 I began cutting out a door shape in the jar. It wasn't pretty but considering that I'll be gluing things to the jar I wasn't focusing on the aesthetics of that door shape. I started building the design of the cottage by gluing sticks to the sides of the jar. I wanted to frame out the doorway first to get an idea of how the design will emerge. Through the process I discovered that I was going to need some stones to fill in the space around the doorway. This at first was giving me pause but eventually I found that this combination worked wonderfully. And.....was hot! That glue can be tricky. 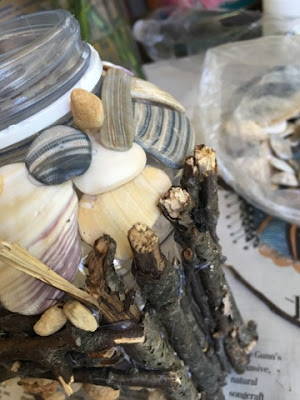 Once I had the stones and sticks glued around the jar I needed to come up with a roof. I had a box of seashells in the garage. They looked like the perfect type of material for the roof. I glued the shells around the top, added some more pebbles, then went to get started on the lid. That's when I realized that when you get things from the recycling bin lids are likely going to be missing. 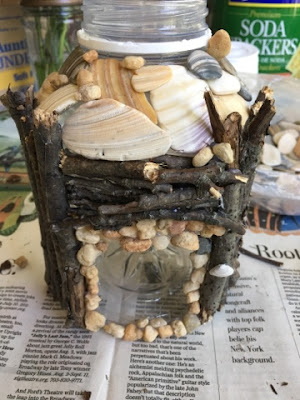 No worries. We eat loads of applesauce in this house I'll grab the lid from the jar in the fridge when it's all gone and the house will be complete. In the meantime Adelynn found a vintage ashtray on my craft sideboard. I was using it for holding bits and pieces of broken jewelry for me to fix but I suppose a roof for the fairy house is what it will be used for now. 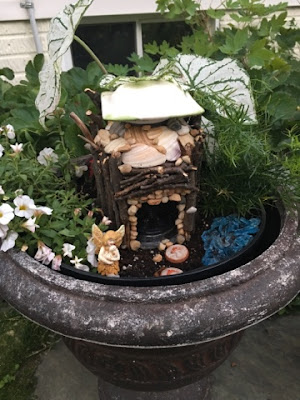 We added some decorative glass for a pond. 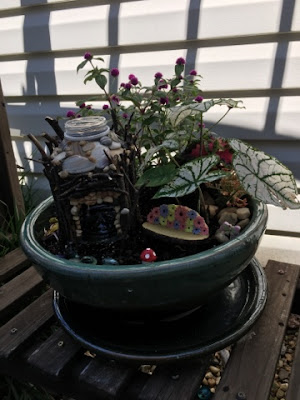 Adelynn added her little couch she found at the craft store. 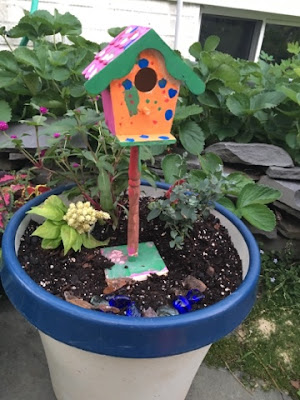 When the littles were in my craft area Jane found the wooden birdhouses. They brought them upstairs and decided to paint them. I had three which meant that even big sister Leah was able to paint one. Hers ended up in her room but the littles took theirs outside to play with in their gardens. Jane decided that her fairies will live in the birdhouse. 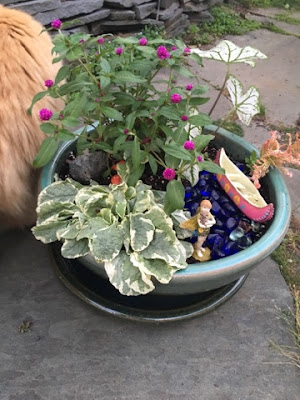 This is big sister Leah's little garden. She loved the little canoe and decided to make a sweet little stream with her pot. Of course the cat was helping her too.
Email Post
Labels: Children Craft-a-Go-Go Crafts Garden Summer