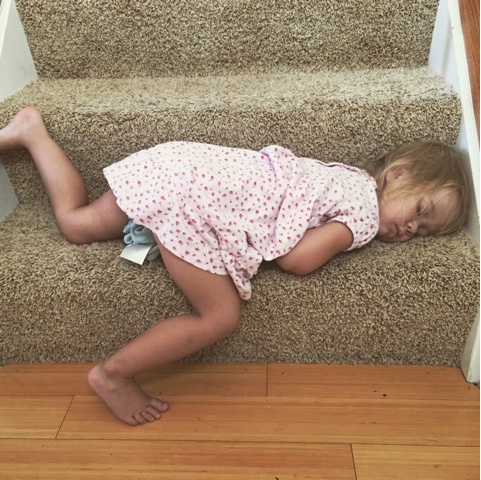 This girl is not an easy napper. Good thing she can fall asleep anywhere and in any position. Because she refuses to nap in her bed she often goes all day without the extra sleep. At first it was terrible with me blaming the transition from crib to bed as the reason for the loss of our nap. I became irritated knowing that her lack of napping was making her grouchy so I tried to condition her to rest in her room. The first days she refused to remain in the room. I gave up and let her miss the nap with the earlier bed time being the compromise. I thought all was well until one afternoon in the quiet which I thought was the sign of a sleeping little girl I discovered the contrary. Rather than rest she found about 100 ways to keep busy in her room. I can only describe the condition of her room as though it had been tossed around. Just about every thing that could be moved was moved. Drawers emptied. Blankets in piles around the bed. Pillows in a big pile. Diapers and wipes decorated the floor like confetti. Books were scattered on every surface. You can imagine my shock upon opening the door. She was WIDE awake and rather pleased with herself and the disaster surrounding her.

So.....instead of getting angry I took a breath and realized yet again I have a NO sleep 'til Brooklyn kid, or rather a No nap 'til Brooklyn kid. She's not going to nap. I can't force it. I know how this goes and it's a battle that is not worth the emotional trauma for both of us. I decided that if she chooses to nap then it will be where she falls. This strategy is a little unexpected for our guests. As you can see this picture is an example of one location that Jane decided was a great place to nap. (I moved her after the picture, I do have standards and sleeping in dangerous spaces is not one I allow) I nod in affirmation that yes, yes, I know the little toddler is lying in a pile of toys in the corner. I shrug and explain that she has to sleep where she falls otherwise there is no sleep to be had. It's unusual maybe? I think it has to be common. Certainly there must be other children with the same quirk that go about their day in a similar manner. Regardless just know this if you ever visit and see a small body with a little blankie in an unusual spot know that I am aware of her being there sleeping because that's just how we do naps in this house.