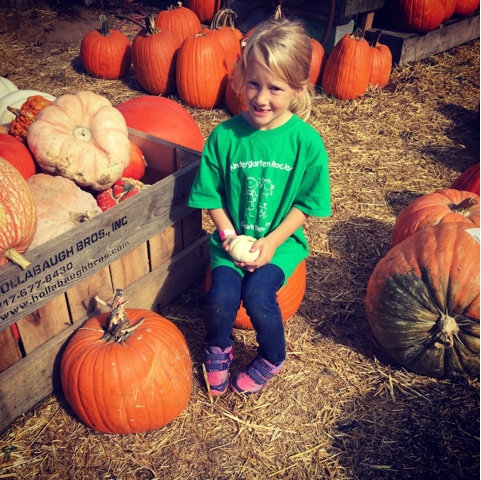 "I would rather sit on a pumpkin and have it all to myself, than be crowded on a velvet cushion." Henry David Thoreau

There she sat with her pumpkin. The pumpkin she chose took little time for selection. She requested a white baby pumpkin instead of the pie sized pumpkins. ( I may have tried to persuade her to choose a pie pumpkin because I was hoping to have three of them to become future pie later on) The stem long gone she loved its shape and size. It eventually was piled into the stroller as we made our way back to the van. Thinking it would be forgotten I tossed that small stemless white pumpkin into the back of our van. Of course she wanted little "Bill" on her lap. I found it buried under blankets and backpacks. Eager to get on home to show her friends the pumpkin rested on her lap as we drove home. I'm not sure what "Bill" will be doing with my girl but she has big plans for her little pumpkin pal.
Email Post
Labels: Adelynn fall field trip Virginia