Ta-da! The gift that was the winner on Christmas day! I made our 16 year old a concert memorabilia shadow box. Over the summer not too far after her birthday we took her to see the band The Lumineers. We introduced her to the band shortly after we saw them open for Old Crow Medicine Show a few years back. She became a fan and listens to them every day so when she got to see them live. WOW! She was in bliss. 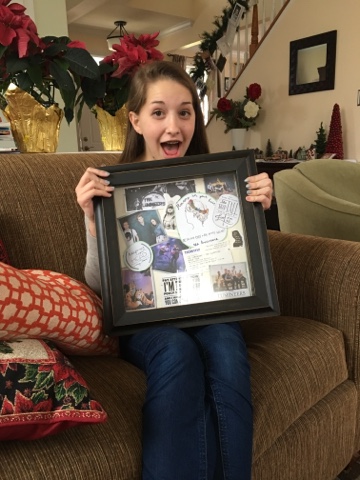 I kept the concert stubs not intentionally but just as I do most things that end up in my purse. It was a month or so after that concert that I found the stubs and decided that I'd like to do something with them. After trying to come up with a WOW gift for her I happened upon a box of frames in our storage room. There staring right at me was a shadow box I found on deep discount back in the summer. I bought it because I had countless ideas for it but never came up with a plan. 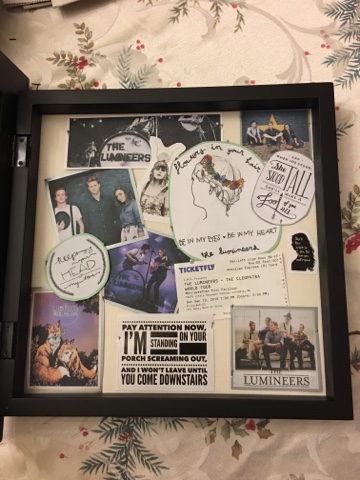 I knew I had the ticket stub.....but what else could I add? I began looking for pictures of the band from their website to see what concerts they have performed. I found various other pictures, old concert posters, and quotes. I ended up finding a few pictures from the band's website and printed them out. I just glued the pictures to some card-stock paper to make them more sturdy. When I told the Mister of my idea he told me there were some stickers he ordered for her from the band's website. I was thrilled. That's exactly what I needed. I gathered my assortment and began to pin everything collage style into the shadow box. What you see is the result of the various pieces I put together. There is room in the shadowbox to add more and I did tell her she could re-arrange anything but she loved it as is so that makes me pretty happy.
Email Post
Labels: Christmas Craft-a-Go-Go Crafts Nifty things Teens Wife