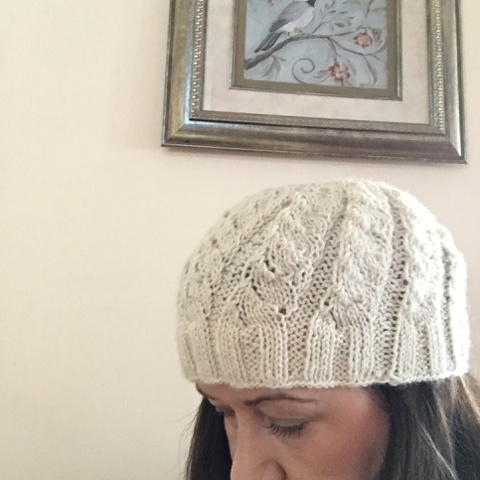 I'm in mild shock that this hat finally became labeled DONE in my projects list on Ravelry. I cast on for this Beaufort hat back in the summer of 2011. I was thinking ahead. I had knit this pattern as a gift for a friend's baby and thought what a lovely hat. So lovely that I decided it was the type of hat I would want to wear. As it went I cheerfully cast on and knit my way through the ribbing and then set it aside. You see more baby gifts were needed and my hat just got lost in the bottom of my knitting basket. For YEARS! Then it just got worse for this hat. I used the yarn to knit another baby hat. I know! How could I!?!

Oh that yarn though. It's really nice to work with and just perfect for baby garments. So despite knowing that I might sabotage myself in using the very yarn meant for MY hat I ignored all my logic and I pulled the yarn from the other side of the ball and knit away. I kept telling myself it wouldn't be a problem that there'd be plenty left over to finish my hat. Time passed and I got back to that hat knitting a bit more into the cables when I realized that I would NOT have enough yarn to finish the hat. Facing the reality made me do what any knitter would do....stuff that project into the bottom of the knitting basket and carry on with other things with the hope that the shoemaker's elves have distant relatives that have a knack at finishing knitted projects. I will tell you that, no, there are no such helpful elf beings that will knit your projects for you during the night. At least they have not decided to inhabit my house yet.

Fast forward to December 2016 when I was longing for a new hat for myself. Sorting through my knitting basket I pulled out this hat and contemplated its progress and its future. A little inner voice was nagging me to just go look in my stash already and just make sure that I did not have any more of that yarn. December has a way of getting away from me and knitting for myself was not a luxury I could indulge. The hat was again set aside and forgotten in the flurry of holiday festivities. By January I knew that I needed to get serious about finishing this hat. I took the plunge and decided one cold weekend that I was going to organize my yarn. In that process which I might add was more fun than I expected I did find another skein of the Plymouth Baby Alpaca yarn in white. I added that to my project bag and made a promise to myself to finish this hat by January 30th!

I'm glad I persisted in this last stretch of the hat. Although I would have preferred to knit one more round of the pattern I was afraid that the hat would end up being too long, my knitter's instinct says it would have been a lot too big if I did knit another pattern repeat. The hat turned out to be slightly too large around but not so much that it would be weird to wear. The size in length is more of a beanie so not quite over the ears entirely but just enough to offer the warmth I need. The simple fact that this hat took me 6 years to finish makes it so much sweeter to wear. The best part is that this hat is absolutely perfectly paired with my blue pea coat. It's so delightfully nautical.
Email Post
Labels: Knitting Wife Yarn