A few weeks ago our Parish held a Lenten retreat for children and adults. I led the second grade group, many of which are enrolled in their sacrament year of Catholic Catechism. Between lessons and activities there would be an art project. I had to come up with an art project that was easy to do for all abilities and it also needed to have the theme "At the foot of the Cross". I began with the obvious: Calvary Hill. A few years ago I made a silhouette project with newsprint. I was thinking of something similar in my mind. I wanted my class to make an easy and meaningful art project to take home. Torn paper art is one of my favorites for children. My example seen here was made using a black painted canvas. At first I was going to make my scene using black poster board since we have so much on hand and it would be large enough for the classroom to see. As I considered further I realized that I had to have a way to have an example to carry with me that would be sturdy enough to stand alone. I chose to create my project using a canvas. I found one already painted at the local craft store which saved me so much time prepping the canvas. 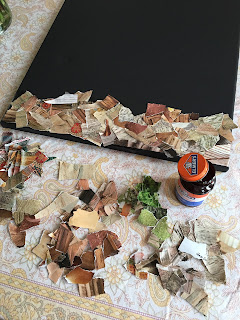 The class used large pieces of black construction paper as the base for their project. I used pieces of magazines for my "Calvary Hill" ground. After spending an hour trying to find the right colors I realized that magazines were not going to be a reasonable option for the classroom. 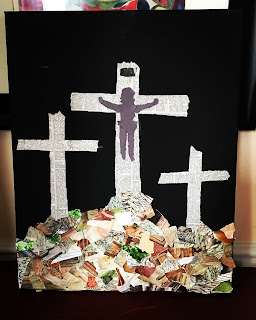 To save time we used torn or cut pieces of brown and orange construction paper. I gave them the option to choose between cutting or tearing. We made crosses torn from sheets of newspaper. Black or gray construction paper was torn to made the body of Christ. Since we were so busy making I didn't think to stop and take a picture of some of the students' projects. There was a good variation of techniques used. What I learned through doing this project with children that was something I had not even considered: Children are too conditioned to do everything "right" or "exactly". Several children were very bothered and a few upset emotionally by the concept of making a project with imperfections. We  must change this attitude! Art and expression should not be stressful. One of my students was so distressed about the crosses being "wrong" and to this child wrong meant the cross was crooked and with rough edges. With some encouragement and praise this child ended up making a lovely composition that was such a huge surprise for the Mother, who was so overjoyed she began to cry, that I was glad we persevered to complete the project.