A few years ago our parish held a Lenten retreat for children and adults. I led a classroom of second grade students in an art project. That retreat was inspiring and fulfilling. Afterward I thought about ways to visually bring images of Lent to the classroom and our home. I wanted to make an easy and meaningful project to display in our home. If the project could also be used as a visual aid for my catechism class that would be even better. I found some ideas on the internet that inspired me to make this Calvary Hill and Tomb display. I liked the idea of growing a Resurrection garden but I didn't like that the garden would only be good for a short time. I was looking to make a Resurrection garden that could be more permanent. This is what I ended up making two years ago with an intention of writing up instructions on how I made it for our home. As you can see I am finally getting around to writing about this project. 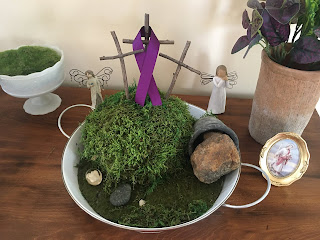 If you would like to make one of your own I'll show you what I did to make this Calvary Hill and Tomb display. The only thing I had for this project at home was a hot glue gun, purple ribbon, and the natural items (twigs and rocks) found in my yard. Everything else I needed to buy. What I knew I needed was something very sturdy a metal tray of some type. I began looking for a pan or tray to set the Calvary Hill in. I considered using an old cookie sheet pan or something similar. That ended up being more tricky than I expected. Those were hard to find at my local thrift stores.

What I found at the craft store was a round rimmed tray. I think it was meant for using as a patio serving tray? A tad smaller in size than I envisioned but very workable. Once I had the tray I began finding the hill and cave. An 8" diameter floral foam half ball was my answer to the hill shape I needed. I found a decorative flower pot in a distressed gray color that was the perfect size for the cave tomb. I didn't need to paint it or prep it in any way. That saved a lot of time. 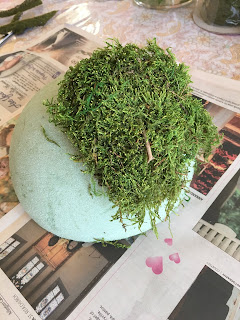 I set up my dining room table for my craft station. I began by taking the floral foam and carefully applying hot glue to the preserved floral moss, pressing gently to secure. I began with the larger clumps gluing them first. I filled in the empty areas with the smaller bunches of moss. While that cooled I worked on the substrate for the tray. I didn't know if I was going to use some burlap then fill the pan with gravel or a moss mat or some other idea. I decided that gravel was going to be too much potential for mess. It would also make the tray heavier to move. 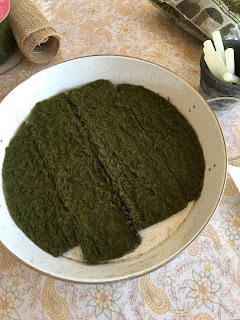 I found a spool of moss covered ribbon that is almost like a ribbon but not quite. It looked like a great solution to filling in the ground area of the display with a vegetation look. It had the most real look of all the things I found at the store. 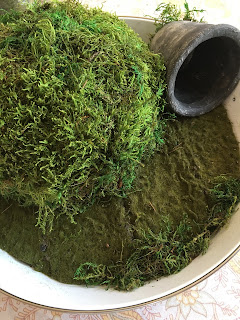 I trimmed off pieces to fit in the pan and used the hot glue gun to secure it down. Areas where I could not get the ribbon moss to reach I glued the remaining florist moss to fill in the gaps. 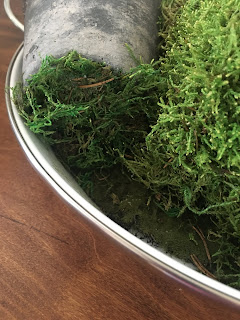 I glued some more moss to the bottom of the flower pot so that it would look like a part of the hill from behind. I ended up using the entire bag of floral moss to complete this project. 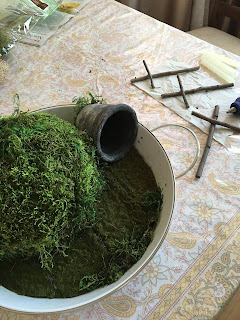 I did not glue the moss covered hill or the flower pot cave to the tray. I decided to keep them unattached so that I would have more flexibility in storing this display when not in use. To make the three crosses I went to my back yard to find sticks. I used garden pruners to trim down to the sizes I needed. I chose to make one cross, the one Jesus was on, larger than the other two. I simply glued them together with the hot glue gun. To affix the crosses to Calvary Hill I used a sharpened pencil to make the initial hole through the florist foam and finished inserting the crosses on the hill.

All that was missing was a large rock to put in front of the cave tomb. I took the flower pot outside with me and began searching my yard for a rock large enough to cover the opening. Good thing my kids like to collect rocks. To finish the display I cut a piece of purple ribbon to hang over the middle cross. During Lent we place this on the antique sideboard in our entryway. I often find decorative additions placed by the children. Recently the smooth river stones disappeared and in their place a small clear angel stone appeared. I sometimes find garden fairies and plastic gems. While to many these things may be seen as a form of disrespect that's not what I see. I see it as small moments where my children stood there in front of Calvary Hill looking at the scene. In that moment of play they were there taking in a piece of Lent.