On Sunday afternoon I brought the bin of vintage thread upstairs to the coffee table. I need to mend a few things and I had been putting off that task far too long. The thread was stashed in my crafty cabinet which was thoroughly blocked by an assortment of small toys that were a pleasure to step on. 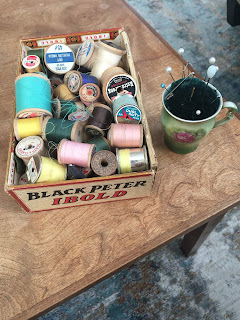 I set the small cigar box filled with thread on the table and looked at it. So many colors. This thread was all part of my grandmother’s sewing collection. As far as I can tell this thread is still in great condition. Unbelievably. I set to work sorting it out. This ended up being a task that took most of the day. Between moments of doing things throughout the day I took a break to sort through the thread. It has been stored in a plastic bin for many years untouched. I had to cut off some terrible tangles and rewind a few spools. They now are neatly stacked in my plastic bin. The cigar box is in bad shape and will need to be thrown away. It too has a story as my grandfather was a cigar smoker. I imagine there were many cigar boxes repurposed to hold sewing notions in my Grandmother's home. 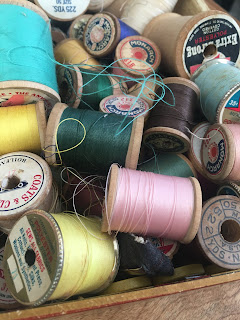 Most of this thread is on wooden spools and is only good for hand sewing projects. While I doubt that I will ever use all this thread in hand sewing it is nice to be able to touch the same spools that my grandmother once used. She too picked over the colors seeking the best match for her sewing project. I have a sizable mending pile and now seems like a good time to get started whittling away at those items. 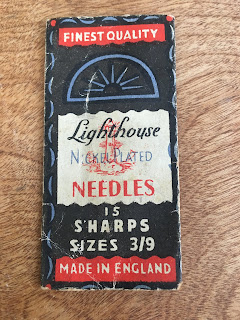 As I made my way through that cigar box of thread I found an interesting set of needles. Still in their package right from England! Lighthouse nickel plated English sewing needles. More than half were still tucked inside. A lovely find indeed! Although the paper package had seen better days the needles were unused. I added the needles to my pin cushion teacup. As I picked up my mending and began to work one of these needles and some of her thread began a new journey and new purpose.
Email Post
Labels: Recycle Sewing Wife