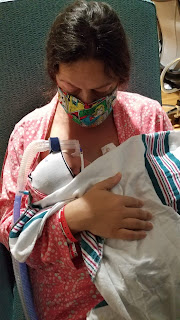 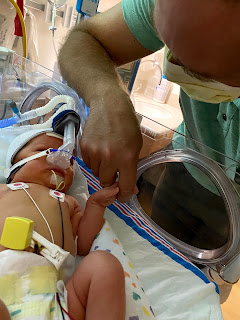 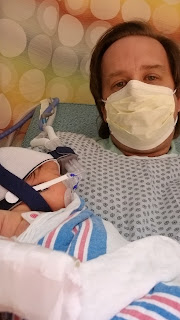 Our sweet boy is a NICU baby. His birth went as planned without complications. Save for one: he just wouldn't breathe. He was not showing as robust of an effort to breathe on his own which worried the pediatricians so they sent DK to the NICU. I was able to see him briefly shortly after he was born. They spent time trying to encourage him to breathe on his own but he was not as responsive as they wanted him to be so it was decided that he would need to be put on a respirator. I was so exhausted and out of sorts I really didn't know what was going on. I knew something was not right but it was not desperately life threatening. The nurses brought in DK for a few minutes in post-op to allow him to get some skin to skin contact with me. I was too weak and tired to really take much advantage of the moment. I wish I had been able to be more responsive myself. I was not able to hold him again for two days. Two days is a long time to have no contact with your newborn. It has been so very hard. Currently DK is still struggling to breathe with fluid still remaining in his lungs. He will remain on the respiratory monitors for the next week or so. I expect to be discharged tomorrow afternoon. This is new territory for us, to go home empty handed, leaving our baby in the NICU until he is well enough to come home. While my head is full of a mother's worry my biggest concern is that of breastfeeding. He is being fed with a feeding tube. I am pumping milk for him but I will not be able to try to breastfeed him until he can breathe on his own. I think this by far has me the most upset. The wondering if he will even be able to breastfeed.....will he prefer bottles only? What if he won't breastfeed? My head is spinning with thoughts. Meanwhile we are relishing every minute that we get to hold our sweet boy. I am looking forward to being able to hold him without all the tubes and wires. To hold the sweet darling baby.
Email Post
Labels: Baby Health parenting