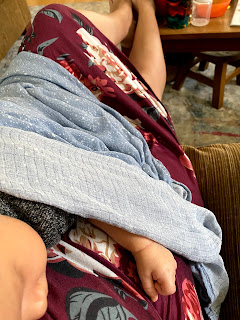 Let’s talk about reflux in babies. It happens to most babies if not all. This sinister little ailment starts to emerge about the 1 month mark. This is when you will begin to second guess your parenting ability and doubt yourself. Many babies are able to handle it with little to no serious issues that affect their daily habits. When I consider reflux serious is when the baby is unable to sleep laying down and screams violently after feedings. We know back is best for sleeping and especially for reflux babies being on their back is the safest way to sleep. (When a baby spits up while sleeping if on their back the fluid will naturally flow down their cheeks and chin away from their nose, this keeps their airways open.) Four of my five children have had reflux in some form. The last three have had what I call serious cases. We chose to not medicate mostly because reflux is largely an anatomical immaturity issue that relies on gravity to keep it at bay. My little guy has been battling the acid reflux for a month now and it has been exhausting. He has been trying hard to not let it bother him but unfortunately once that reflux creeps up on him he is a sad baby. Unlike his sisters who would suffer with endless screaming he has not been one to vocalize his anguish. He does cry when a bout hits and is quick to calm once he settles. The previous two girls would scream for hours on end fighting the pain and resisting bedtime. They made this phase an immense challenge to overcome.

Reflux is exhausting for the caregivers. For our children reflux made them incapable of sleeping a full night alone on their back. After laying flat for a while they begin gurgling as the esophageal flap opens releasing stomach contents. Gurgling leads to gasping then to choking noises. Often they end up “spitting up” that’s the cute way doctors like to use to describe it but really they are vomiting all over themselves. In my opinion this is the reason their reflux is a serious case, when it prevents sleeping. So we are taking the days as they come. I sleep with a baby on my chest sitting in a chair. What I know after 20 years in this gig and handling multiple cases of reflux is that only time and patience is the solution. Gravity is the enemy and solution. So we sleep as we can and I spend all day wearing a baby. When they are close to being independent sitters I know we are rounding the corner. There are factors that can contribute to reflux being more serious. These are often related to the baby's feeding ability. Often babies who cannot latch will have more intense episodes of reflux. Narrowing down the feeding challenges will do wonders. Lactation consultants are helpful in identifying and reducing those issues. We have a plan in place for our little guy.