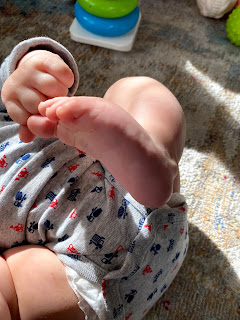 The little guy celebrated his half birthday last week. Here we are at 6 months old! We are still working through the reflux that lingers. Oh that reflux! Won't it just move it along? Although he still has moments of reflux hitting him it is no where as dreadful as it was a month ago. He's not quite sleeping through the night, his hunger wakes him too much. Even as his breastfeeding endurance has improved he still does not and likely won't ever nurse as long at a time as he would if the tongue tie didn't disrupt his feeding. So, there we are, still up often at night for a snack or three. He is sleeping better. I'm spending less time with him on me elevated in a chair to reduce his reflux. Some nights are hard for his tummy but those are going down to once or twice a week. Despite the reflux he does have a good appetite and a delightful attitude. I can't say I would be that pleasant if my stomach was bothering me all the time.

Being 6 months old has been all about him taking on the challenges of using his body. While he likes to do things he still very much prefers being held as often as possible. As far as other things go he likes his blankie, sharing morning smiles, the soft kitty, knocking down blocks, tossing his toys, rolling over, chewing his toes, being outside, standing up, story time, and trying solid foods. His personality is far more evident and I can tell he has so much more to show us.